A historical database of energy use by country or region, energy level, sector, energy carrier, and end-use type. 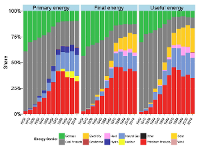 The historical Primary, Final and Useful Energy Database (PFUDB) is a data set on energy use with several dimensions, presented in an accessible way. It has global coverage on the primary, final and useful energy (and exergy) levels, for the period 1900-2010, and it can be disaggregated into 20 countries/regions, 5 sectors, a dozen energy carriers, and 7 energy end-uses types. It is the first data set presenting exergy balances and extending traditional energy systems boundaries to the level of useful energy/exergy. Another unique feature of the dataset is that it enables to disaggregate energy use by economic sector, by energy carrier, and end-use type, across all levels from useful, to final, and up to primary energy use.

Long-term energy transitions have traditionally been characterized in terms of primary energy inputs, the main reason being data availability. However, it is energy end use which is the basic driver of the dynamics of the energy system. Moving down the energy chain, useful energy is the last level at which energy flows can be measured and expressed in commensurable units, and therefore constitute the closest energy proxy to energy services, the actual output of energy systems. Energy system transitions at that useful energy output level show the effects of efficiency and productivity gains which are not apparent at the levels of primary and final energy inputs. This data set is the first to present long-term historical series of final and useful energy (and exergy) with global coverage and thus complements traditional, input-oriented energy statistics and data sets.

The PFUDB was constructed at IIASA from various historical and contemporary energy statistics and data sources. Useful energy was estimated from final energy by sector, energy carrier and end-use through a final-to-useful energy conversion efficiency model based on a meta-analysis of historical efficiency estimates, whose dynamics are modeled as a function of the degree of economic development by country or region. For period 1900-1970, for which no published comprehensive final energy statistics are available, final energy use estimates were derived from available primary energy statistics. The data series construction is documented in detail, with underlying sources and assumptions, in an accompanying document,  IIASA Interim Report IR-14-013 (De Stercke, 2014).

The PFUDB is available in an online interface which allows quick visualization and data export in an Excel-readable format. On any level, data can be viewed by sector, energy carrier and end-use, as well as aggregated by any of these categories.

How the PFUDB interface works

A tutorial of how to use the online interface can be found on the ‘about’ page of the database. The folder structure of the variables in the online database interface is set up so that the database can be filtered on various categories. First, the user selects the type and level of the variable: primary, final or useful; energy or exergy (or the other variables population or GDP). Then, the user selects on what category to filter first: ‘Fuel’ for energy carriers, ‘Sector’ for economic sectors, and ‘Use’ for energy end-use types. A “Quick Balance access” allows users to extract complete energy/exergy balances at the desired disaggregation level.