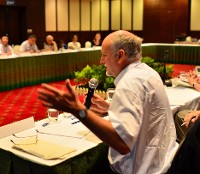 As in previous years the Wittgenstein Centre for Demography and Global Human Capital (IIASA, VID/ÖAW, WU) is taking part in IIASA's Southern African Young Scientists Summer Program (SA-YSSP). The SA-YSSP is organized jointly by the South African National Research Foundation, the South African Department of Science and Technology, the University of the Free State in Bloemfontein, South Africa, and IIASA and is a three-month program for talented young researchers to work with scientists from South Africa and IIASA.

For the duration of the program, participants are carrying out collaborative research projects at the University of the Free State in Bloemfontein, South Africa. The projects relate both to their doctoral studies and to IIASA research that uses systems analysis methods to address major societal problems. Each young scientist works with a collaborating team of advanced researchers, including one researcher from South Africa and the other from IIASA or IIASA's research network.

Raya Muttarak, researcher at IIASA's World Population Program, is co-supervising two students under the theme "Demographic differential vulnerability to environmental change and climate variability in sub-Saharan Africa". With Mr Martin Flatoe she is working on "Female-headed households, land ownership, and vulnerability to climate change in South Africa", and with Mrs Mantsebo Letsie she is elaborating "Vulnerability to climate change and variability on crop yields and implications on household welfare in Lesotho".

Under the research theme "Migration trends in post-apartheid South Africa" Guy Abel from the Wittgenstein Centre (IIASA, VID/ÖAW, WU) is co-supervising a project entitled "Access to health care services by refugees in South Africa: A case study of the congolese community living in the city of Durban".

World Population Program Director Wolfgang Lutz will give a presentation entitled "World population trends and adaptive capacity to climate change" at the Closing Ceremony that will take place on 30 January 2015.