IIASA researchers Anne Goujon and Bilal Barakat will discuss demographic scenarios for Africa, and the link between development projects, education and fertility at this expert conference. 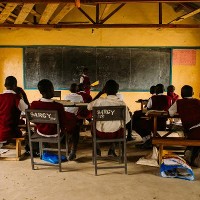 The financial institution and main implementing agency for France’s governmental development assistance to developing countries and overseas territories, Agence Française de Développement (AFD) has invited demographers and economists to discuss factors that could influence African demographic challenges, including the interplay between fertility behaviours, education and health policies, and women empowerment. At this conference, AFD aims to provide a multidisciplinary setting to enable researchers and experts from the international development community to discuss how demographic trends in Africa could be turned into development opportunities.

Two researchers from IIASA's World Population Program are invited speakers at this event. Bilal Barakat will present alternative demographic scenarios for Africa and their consequences for development during the third session "Demographic perspectives and development". The presentation is based on a recently published paper in the journal Proceedings of the National Academy of Sciences, coauthored by Guy Abel, Bilal Barakat, Samir KC and Wolfgang Lutz, that discusses how achieving the Sustainable Development Goals (SDGs) set by the UN in 2015 for the period up to 2030 would lead to a global population of between 8.2 to 8.7 billion by 2100. The new projections show a population growth below even the lower bound of recent UN probabilistic population projections. Detailed information to this study can be found on our website.

Anne Goujon will discuss the link between Structural Adjustment Programs, education discontinuities and stalled fertility in Africa during session five on human capital. Goujon, together with Wolfgang Lutz and Samir KC, published a study under the same title in 2015. They showed, that countries in Sub-African countries that are classified as having experienced stalled fertility declines after 2000 also experienced a discontinuity in the progress of educational improvement for cohorts of women that during the 1980 were in their primary school ages. While the proportion of young women without any formal education had been gradually declining over the previous decades the Structural Adjustment Programs of the early 1980s where associated with a stall or reversal of this improvement. After that in most countries the improving trend picked up again for the subsequent cohorts, but some cohorts of less educated women entered the prime childbearing ages around 2000. Given the strong fertility differentials by education in the countries concerned these education discontinuities provide a plausible explanation for the fertility stalls over the period. Since younger cohorts are again much better educated this also implies a likely end of the fertility stall.

More information can be found on the event website.