This report presents scientific achievements and results as well as core scientists and their research focus during the period 2011-2017. 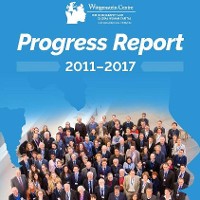 The Wittgenstein Centre for Demography and Global Human Capital (IIASA, VID/ÖAW, WU) abbreviated as WIC, was established on the basis of the Wittgenstein Award 2010 with the vision to use the enormous and still untapped potential of multi-dimensional demographic
methods developed in and around IIASA during the 1970s and 80s to analyze and forecast broader socioeconomic changes that explicitly include into the models more relevant demographic characteristics than just the conventional age and sex. In particular, the theoretical and empirical analysis of changes in educational attainment (as a proxy for human capital) is a promising direction of research which helps to make demography more relevant for answering a broad range of important social, economic and even human-environment questions.

Another unifying theoretical concept is the model of “Demographic Metabolism” (introduced
by Ryder and operationalized by Lutz) which describes how societies change as a function
of young cohorts with different characteristics replacing older ones. It formalizes the widely
held view that the entry of new generations brings change into organizations and societies.
Combined with multi-dimensional demographic methods it becomes a powerful tool for forecasting socioeconomic change. It may be the only model in the social sciences with predictive power for decades.

Over the past years this multi-dimensional approach has already shown its immediate practical potential for dealing with key policy challenges of our rapidly changing world, along the way providing new and sometimes surprising answers to such questions as: What is the desirable level of fertility and how can it be measured and assessed? Will population ageing actually result in the often feared massive increase in disability? Is population ageing a threat to economic wellbeing? Does Europe need migrants for demographic reasons? Can education help to slow cognitive ageing and what should be the priority investments for our ageing Western populations? What are the drivers of continued population growth in Africa and what are the best investments for enhancing the adaptive capacity for coping with already unavoidable climate change? Using these multi-dimensional demographic approaches researchers at the WIC deal with many such questions in an innovative way.

Based on this joint vision, the WIC was established to bundle the existing strengths in demography in the Vienna area to create the critical mass for a globally leading research centre. It is not a separate legal entity but rests on three pillars (IIASA, VID/ÖAW and WU) which will be described on the following pages. Over the first seven years of its existence it has already had a significant impact in terms of publications and advancing our vision. On top of its rather limited core funding it has acquired significant competitive funding, not least in the form of already eight ERC grants. This report provides an overview over these activities between 2011-2017.

About the Wittgenstein Centre

The Centre is a collaboration among the World Population Program of the International
Institute for Applied Systems Analysis (IIASA), the Vienna Institute of Demography of the
Austrian Academy of Sciences (VID/ÖAW), the Demography Group and the Research Institute on Human Capital and Development of the Vienna University of Economics and Business (WU). In late 2010, a letter of understanding was signed by these three pillar institutions defining the terms for this collaboration under a common roof.

The Centre combines the partners’ strengths in the fields of demography, human capital formation and analysis of the returns to education. It builds on a highly successful collaboration that has already generated significant scientific advances. “Human capital” refers to the human resource base in terms of the number of people and their changing structure by age, gender, location, education, health status, cognitive skills and other relevant characteristics. Our intent is to provide a sound scientific foundation for decision-making at various levels.