The 2018 update of the Asian Demographic and Human Capital Data Sheet has a focus on meeting the United Nations' Sustainable Development Goals education targets. 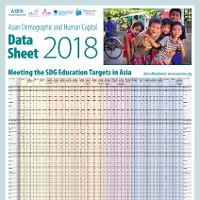 The Asian data sheet provides a window on indicators related to demographic changes and education processes in the countries of the region. It also includes data on labor force participation and urbanization. For each indicator, the data sheet allows a comparison between three data points: 2000, 2015 and 2030 according to a medium scenario projection.

The 2018 version focuses on an essential composite of the education target of the United Nations’ Sustainable Development Goals, 2030: Ensuring that all boys and girls complete secondary education. While the target has already been reached in most East and Central Asian countries, the situation is different in many countries in Southern and Western Asia where the education scenario based on a global trend does not allow for successfully completing the target in 2030 and particularly for women. This happens in a context of high population growth. For instance the population of Yemen would increase from 27 million in 2015 to 38 million in 2030, and Pakistan from 189 to 245 million.

Noticeably, a few countries would have a negative population growth rate in 2030, i.e. Armenia, China, Japan, and South Korea. In those countries, but also in others, population ageing will be very pronounced. The share of the population above the age of 65 years will increase dramatically in Japan (31% in 2030), in Hong Kong (26%) or in the Republic of Korea (24%) or in Singapore (22%). This will happen in the context of increased life expectancy that could imply a shift to delayed age at retirement. In Japan, women born in 2030 are expected to live for 90 years, same in Hong Kong.

In many countries in Asia, the population is still very much concentrated in the younger age groups. In 2015, more than 4 out of 10 inhabitants of Yemen, Timor-Leste, Palestine, Iraq and Afghanistan were under the age of 15. In Cambodia, Jordan, Lao, Nepal, Pakistan, Philippines, Syria and Tajikistan, young children make up about one-third of the population. With the foreseeable decline in the number of children that women will bear, the share of the youth will decline in the future. This is also linked to the increase in the levels of women’s education which is negatively correlated with fertility. For instance, in 2000, only 13% of women had an upper-secondary education or more in Nepal. They were 34% in 2015 and according to the global trend scenario, 54% in 2030. The total fertility rate is expected at the same time to go down from 4 children born to women on average in 2000 to 2.3 in 2015 and to 2.1 in 2030 according to the same scenario.

The challenge of educating the youth will be very important in many countries and will require important investments in the educational sector if targets are to be met or approached. The efforts that have been in place to bridge the gap between the education level of men or women have paid in many countries that show no gap at all or even sometimes a reverse gap with more women achieving higher levels of education compared to men. In 2015, the mean years attained by young cohorts of women (aged 20-39 years old) was higher than that of men in half of the Asian countries (25), particularly in countries where large shares of young women have attained a post-secondary education, e.g. in Israel and Taiwan. This means also than women were still lagging behind men in the other half countries (24). The difference is striking in Afghanistan (young men had 2.8 years of education on average than women), Pakistan (2.0 years) and Yemen (4.0 years).