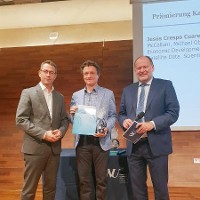 The WU City of Vienna Best Paper Award is a distinction awarded to the best articles published in the previous year, and is intended to encourage WU researchers to publish in internationally recognized journals. Two researchers from IIASA's World Population Program were honored for their scientific contribution in 2017.

Wolfgang Lutz received the additional prize for "New Research Avenues" for his paper entitled "Global Sustainable Development priorities 500 y after Luther: Sola schola et sanitate" which was his new member contribution to Proceedings of the National Academy of Sciences (PNAS). This prize was presented to a submission in any of the three categories to the most innovative paper, leading the way into new fields or connecting the research area to previously separated fields.