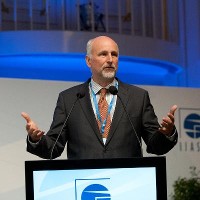 The Academia Europaea was founded in 1988, on the initiative of the UK's Royal Society and other National Academies in Europe. Academia Europaea is the only Europe-wide Academy with individual membership (~3900) from Council of Europe states and other nations across the world. It is an organization of eminent, individual scientists and scholars, covering the full range of academic disciplines. The Academy organizes meetings and workshops, provides scientific and scholarly advice and publishes the international journal 'European Review'.

Based on his sustained academic excellence in his field, the primary criterion for membership, Lutz was nominated and successfully elected for the period 2018/2019. Lutz has worked on family demography, fertility analysis, population projection, and the interaction between population and environment. During his long career, he has conducted a series of in-depth studies on population-development-environment interactions in Mexico, several African countries, and Asia, has authored a series of world population projections produced at IIASA and has developed approaches for projecting education and human capital.

Lutz is author and editor of 28 books and more than 250 refereed articles, including seven in "Science" and "Nature". In 2008 and 2017 he received ERC Advanced Grants, in 2009 the Mattei Dogan Award of the IUSSP, and in 2010 the Wittgenstein Prize. With the latter he founded the Wittgenstein Centre for Demography and Global Human Capital, a collaboration between IIASA, the Vienna Institute of Demography (VID) of the Austrian Academy of Sciences, and the Vienna University of Economics and Business (WU). He further received the Mindel C. Sheps Award of the Population Association of America (PAA) and the European Association for Population Studies (EAPS) Award for his groundbreaking contributions to the study of populations in 2016.

For a full list of awardees please visit the Academia Europaea website. The official ceremony will take place during the 2019 member conference that will take place on 23-25 October, in Barcelona.