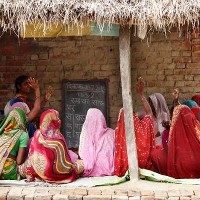 For their paper entitled "Education or economic status? Comparing their relative effect on prime age adult death in India using longitudinal survey", former IIASA-YSSP student Moradhvaj and his co-authors World Population Program Director Wolfgang Lutz and former IIASA researcher Nandita Saikia, as well as IIASA scientists Erich Striessnig and Samir KC received the best paper award at the Second Asian Population Forum in Shanghai, China. The paper was Moradhvaj's topic during his participation in the 2019 YSSP, which was made possible by the Jyoti and Kirit Parikh Fellowship. Lutz and Saikia were also his supervisors during this period.

The Asian Population Forum is one of the main platforms of the Asian MetaCentre for Population and Sustainable Development Analysis to exchange research ideas and experiences of its collaborating institutes in comparative analysis of population dynamics across Asia. The forum was organized by the Asian Demographic Research Institute (ADRI) at Shanghai University, the headquarter of the Asian MetaCentre and was held between 11-12 October in Shanghai, China.

Introduction. Improvement in the health status of the population is closely related to its level of socio-economic development. Several studies emphasized on the relationship between mortality and socio-economic status measured through importance of occupation, income, wealth and education (Pamuk, Fuchs & Lutz  2011; Lutz & Kebede 2018). However, research seeking to understand the relationship of education and economic status of individuals with adult mortality is an unexplored phenomenon in developing countries. This study examines relative effect of two primary aspects of development, education and economic resources on prime age adult mortality in more comprehensive way than has been done before in India.

Methodology. Using the data from a national sample of 115781 Indian adults aged 15-59 years form India Human Development Survey (IHDS) of wave 1, conducted in 2004–2005 and wave 2, conducted in 2011–2012, this study analyses the relative effect of educational attainment and economic status on prime age adult deaths between 2004-05  and 2011-12 in India. Using the two-level logistic regression model accounting clustering with in the communities, we have estimated the independent effect of educational attainment and economic resources measured at individual and community level on prime age adult mortality.