IIASA World Population Program Director Wolfgang Lutz has been elected to the World Academy of Sciences. 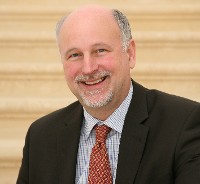 The World Academy of Sciences (TWAS) is a global science academy based in Trieste, Italy, working to advance science and engineering for sustainable prosperity in the developing world. At the Academy's 25th General Meeting in Muscat, Oman, on 26 October 2014 fourty-six new fellows were elected, one of two European candidates, Wolfgang Lutz in the category Social and Economic Sciences. They will be inducted at the Academy's 26th General Meeting in 2015.

Wolfgang Lutz was nominated for his contribution to quantitative analysis of global population-development-environment interaction with emphasis on climate change; broadening conventional methods to the multi-dimensional modeling of human capital and innovative methods for international population projections.

Along with Lutz, renowed physicist Anton Zeilinger is among the nominees. The complete list and more information is available on the TWAS website.