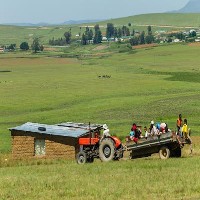 The WWF-SA and the Roundtable on Sustainable Biomaterials (RSB) are collectively undertaking a project to support the development of sustainable aviation biofuels in South Africa and the sub-Saharan Africa region. This initiative takes place in the wake of the aviation industry’s increasing interest in the use of biofuels as an alternative fuel. WWF-SA commissioned IIASA to conduct a spatially detailed resource assessment for different biofuel feedstocks and develop a set of scenarios up to 2050 to assess biofuel feedstock potentials for sub-Saharan Africa, subject to defined sustainability criteria.

The IIASA/FAO Global Agro-Ecological Zones (GAEZ) modelling system was applied for the estimation of the production potential of bio-energy feedstocks across Sub-Saharan Africa. Additional feedstocks of particular interest for aviation biofuels including a variety of solaris (tobacco), triticale and camelina were integrated into the GAEZ assessment. GAEZ together with IIASA’s World Food System (WFS) are the main components of the ecological-economic modelling framework that connects biophysical and socio-economic processes on a global scale. It was used to analyze two development scenarios to estimate the sustainable biofuel potentials that are compatible with long-term food security and environmental integrity.

Cumulative biofuel feedstock potential from REMAIN land in a circle of 100 km, 2010 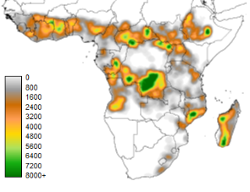 The map shows for each pixel the estimated cumulative potnetial production (in TJ equivalent) using crop biomass of sugarcane and miscanthus from prime, good and moderately suitable rain-fed REMAIN land subject to a 60% GHG Critierion. © IIASA

The study applies a set of defined sustainability criteria, developed by the RSB and considered best-in-class. They include land use and conservation (no deforestation, preserve protected areas and areas of high environmental value), food security (retain adequate land for food production), greenhouse gas emission savings (minimum of 60% savings compared to fossil fuels when using a 20-year accounting period), and water security (only rain-fed biofuel production considered).

Results of the study regarding the availability and productivity of land reserves in sub-Saharan Africa indicate for 2010 the existence of some 1.9 million km2 grass- and shrubland. These areas (termed REMAIN land) are in excess of land that is needed to achieve food security, land that is legally protected or land that should be set aside for nature conservation and environmental protection, including forest land, key biodiversity areas and wetlands.

However, exploitation of these land resources, requiring land conversion from natural shrub land and grasslands to cropland followed by intensive feedstock cultivation practices, will result in substantial initial carbon debts due to the removal of the existing vegetation and the partial loss of soil carbon.

Following the strict sustainability greenhouse gas saving criteria set by the RSB implies that almost exclusively perennial biofuel feedstocks, requiring less frequent and less intensive cultivation of soils, can meet those criteria when conversion of natural grassland or shrub land is involved. Consequently, only land that meets the specific ecological growth requirements of perennials can be considered, which restricts the choice of suitable rain-fed areas to mainly the sub-humid and humid climate zones. Considering all 11 biofuel feedstocks evaluated in this study and selection of the best feedstock in energy terms when multiple feedstock production is agronomically viable, 0.8 million km2 are agro-ecologically very suitable (prime land) or suitable (good land) for biofuel feedstock production. The technical biofuel potential of these areas amount to 7.1 thousand PJ of biofuels (lower heating value equivalent). The majority of this biofuel ‘umbrella’ stems from miscanthus (52%), followed by oil-palm (18%), and sugarcane (13%).

In the future, the estimated biofuel potentials of the available REMAIN land will likely be significantly reduced. Depending on scenario, by 2050, a reduction in the order of 20% is due to land conversion for food production needed in response to future demographic changes and improved diets due to the expected economic development process and income growth in sub-Saharan Africa. The land suitability and yield impacts of climate change will further reduce potential biofuel production by about 10-15%, especially when the potential is based only on perennial crops as a consequence of imposing a strict GHG criterion for soil carbon recuperation. The estimated biofuel potential on prime and good land compliant with the RSB sustainability criteria in 2050 amounts to 3.0– 4.0 thousand PJ.

For biofuel production to be viable, a minimum cumulative concentration of biomass raw materials must be available around a biofuel production plant. In this context, achievable cumulative energy production potentials were calculated for each grid-cell assuming a collection radius of 50 km, 100 km and 200 km. Considering cumulative feedstock potentials (in TJ of biofuel) from REMAIN land for vegetable oil producing feedstocks complying with the 60% saving GHG criterion, oil palm and jatropha emerge as the defining feedstocks. Bright spots of cumulative biofuel potentials of over 3000 TJ occur in several locations in tropical SSA, notably in the Democratic Republic of Congo and the Gulf of Guinea region. A similar spatial pattern emerges when considering sugar/starch based biofuel feedstock production. The dominant feedstock is, by far, miscanthus requiring second-generation biofuel production technologies. Large-scale industrial production for these second-generation conversion pathways that convert the cellulose from the miscanthus grass to biofuels is not yet commercially viable. There are extensive research and demonstration projects, yet the speed and scale of future deployment is uncertain.

If second-generation conversion pathways become economically compatible, crop residues could be considered as biofuel feedstocks. Allowing 2 tons of crop residues per hectare to remain on the field as cover to reduce soil loss risks and to maintain soil fertility, results for sub-Saharan Africa’s cropland in 2010 indicate a usable crop residue potential of 75.7 million tons from cereals, 11.8 million tons from oil crops and 9.6 million tons from sugarcane (in dry weight). Unlike REMAIN land, which will be decreasing towards the 2050’s, cultivated land and associated crop residues will be increasing.

The transition to a low-carbon economy with biomass as one of its energy sources will intensify the energy-agriculture linkage and add a new dimension to agricultural systems, heighten resource competition in the food system, and may provide new opportunities for rural communities. The study reveals that increasing biofuel feedstock production in Sub-Saharan Africa, while at the same time meeting food demand targets and strictly following sustainability principles, faces a high degree of complexity. The study highlights that attaining the sustainability goals and avoid unintended consequences of increased biofuel use requires next to sustainability criteria, an analysis of future development pathways.