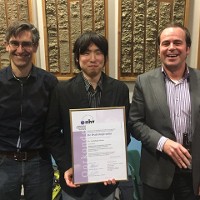 Once every three years the Dutch Hydrological Society awards its prestigious Hydrology Prize (NHV Hydrologieprijs) to recognize exceptional contribution to hydrological science. Yoshi, who has published over 50 articles in the field of hydrology over the last decade, won the prize due to his groundbreaking work which revealed the impact of human water consumption on drought.

Historically people have blamed the weather for droughts. Due to this work, it is now recognized that that human consumption can have a significant impact on the frequency and severity of droughts. This has huge ramifications for how water resources should be managed.  With the global population and their water demands expected to increase significantly in the coming decades, these findings are vital for ensuring the sustainable management of water resources.

This work was remarkable due to the scale of its contribution to both hydrological science and water resource management.