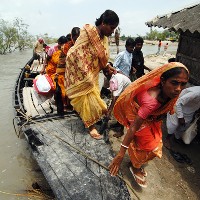 The new IPCC focus in AR5 [1], which formerly emphasized adaptation to climate itself, now stresses risk management as the fundamental policy response to climate change. Adaptation alone is no longer enough. According to researchers, including three from RPV, climate change is a “threat multiplier” that can worsen climate variability and aggravate existing stresses. This new focus acknowledges the high uncertainty with respect to future climate change impacts on natural disaster losses, while emphasizing the need for the iterative management of current and future risks.

A discussion in Economics of Adaptation [1] found that economic efficiency, together with considerations of equity and acceptability of decisions, should guide climate policy and that decisions can be adapted over time as more is learned about climate-related impacts and risks.

Another study showed the lack of quantified knowledge about the additivity of climate change on societies’ vulnerability to hazards, which is still an essential part of global negotiations. To date, research has focused almost exclusively on normalizing losses for changes in exposure, and not normalizing for changes in vulnerability, even though some countries such as Bangladesh (see Figure 1) have taken significant and successful risk-reduction measures. The study further shows that estimates of future losses under climatic change may be overstated. It also reinforces considerable research in RPV and elsewhere that there are substantial benefits to supporting vulnerability-reducing measures in many regions [2].

Figure 1. RPV contributed to a novel methodology to empirically measure and project economic vulnerability, which is fundamental for understanding future climate-related risk. It shows baseline and future (2020 and 2050) riverine flood risk in Bangladesh with constant (dashed) and dynamic (in blue) vulnerability. With dynamic (i.e., decreasing vulnerability), future risk is estimated to increase substantially, although at smaller increments as compared with the constant vulnerability case [2] (click on image to enlarge).

RPV contributed to a paper [3] showing that literature on climate policy analysis and impact assessment continues to be driven by standard economics, with economic tools having been increasingly criticized for not adequately capturing salient observed socioeconomic realities, and not acknowledging pluralism in values. New development-compatible methodology, developed as part of the UNEP MCA4Climate project, uses multi-criteria analysis that can account for multiple values, interests, trade-offs, and synergies between climate policy goals, their likely consequences, and the development objectives of the country wishing to put into practice its climate policy plans.

Towards a climate risk management approach for adaptation