The Intergovernmental Panel on Climate Change (IPCC) has released the second part of its 5th Assessment Report (AR5), “Impacts, Adaptation, and Vulnerability.” IIASA research provides an important input to the report. 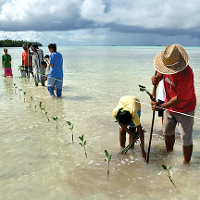 The new report incorporates the latest research on impacts, risk, and adaptation, tying in climate change with socioeconomic development, drawing heavily on research conducted at IIASA. The research shows that risk, vulnerability, and economic development go hand in hand and must be addressed in an integrated way, and better defines the potential human impacts of climate change.

Risk and vulnerability
“This report represents a fundamental shift in thinking towards effectively informing decisions on climate adaptation that are embedded in questions pertaining to development and sustainability. Essentially, it suggests a perspective framed around climate risk management,” says IIASA researcher Reinhard Mechler, lead author of Chapter 17 of the Working Group II report, “Economics of Adaptation.”  Such an approach focuses attention on managing climate risk in the context of development opportunities, for example, helping people escape poverty in the face climate and global change rather than only thinking about the climate impact.

“The way forward is to think more realistically about decision making on climate risks,” says Mechler. “The new report steps beyond no-regret and win-win strategies, to move towards multi-metric decision making and adaptive responses. It considers economic efficiency in line with the equity and acceptability of decisions and making sure decisions can be adapted over time as we increasingly learn about climate-related impacts and risks.”

The new Working Group II report incorporates research that was released in an IPCC special report, “Managing the Risks of Extreme Disaster.” Three IIASA researchers served as authors on that report, which called for increased efforts to help communities adapt to the growing risks of extreme weather, linked to human-caused climate change.

Climate impacts
IIASA research on the impacts of climate change has also played heavily into the new report. For example, research published in a special issue of the Proceedings of the National Academy of Sciences in summer 2013 showed that the impacts of climate change could be greater than expected in areas ranging from water availability, health, and agriculture. The special issue resulted from an unprecedented model intercomparison project, ISI-MIP, conducted in collaboration with the Potsdam Institute for Climate Impacts Research.

“Thanks to this project we now have a far better idea of the human impacts of climate change. The human costs of climate change are often triggered by the biophysical impacts, but are not identical to the impacts themselves. This research, an important input to the the AR5, helps us understand how the natural changes will affect people, for example through socio-economic systems,” says IIASA Director General and CEO Prof. Dr. Pavel Kabat, review editor for Chapter 3 of the report, “Freshwater Resources.”

Kabat says, “IIASA’s systems analysis approach is key for addressing global problems such as climate change. The IPCC’s Fifth Assessment Report incorporates this viewpoint even more than in previous iterations, providing a greater understanding of how climate change will impact water, food production, and other scarce resources on our planet.”

Reinhard Mechler explains the key findings of the report.