December 2013. Options Magazine, Winter 2013/2014
How will climate change affect people around the world? The new ISI-MIP project, a collaboration including 30 research institutes around the world, provides the most comprehensive assessment yet. 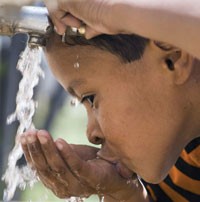 Although climate change impacts have been modeled in one-off assessments, impacts frequently extend beyond the climate system itself, affecting both environmental and socioeconomic systems.

One way to pull together information across such a broad field is to compare the results from different models that address a specific question. Scientists have already performed model intercomparisons for the physics of the climate system, the economy of climate protection, and climate impacts on specific sectors.

The new Inter-Sectoral Impact Model Intercomparison Project (ISI-MIP) is the first to produce state-of-the-art climate impact studies with the focus on climate change effects on human beings. ISI-MIP is a collaboration between IIASA and the Potsdam Institute for Climate Impact Research (PIK), with backing from Working Groups II and III of the Intergovernmental Panel on Climate Change (IPCC). It relies on the research framework of the Representative Concentration Pathways Options and the Shared Socioeconomic Pathways (see Options, summer 2012), which IIASA played a large role in developing, and its organization is based on the Water Model Intercomparison Project (WaterMIP), in which IIASA Director and Chief Executive Officer Professor Dr. Kabat is involved. According to PIK Director, John Schnellnhuber, this comprehensive and rigorous model inter-comparison will "help to fill a sore gap in the IPCC’s report,” and in future research.

It is crucial to understand how climate change can affect the current and future functioning of human societies and economies and how we can adapt—as a whole and in parts. Pavel Kabat

One of the systems examined by ISI-MIP research is water. It is known that as the planet warms, a growing number of people globally will be affected by severe reductions in water resources. Others will also experience increases in average water availability, due to higher or more frequent precipitation.

What we don’t know with any degree of certainty is: How much warmer will the climate become? How many more people will be affected? How severely will water resources be reduced? How much more water will be available? How great will the adverse effects be? Andwhere, geographically, will water deficits or surpluses occur?

A series of papers on every aspect of climate impacts was recently published in a special issue of the journal Proceedings of the National Academy of Sciences (PNAS), co-edited by Schellnhuber, Kabat, and Frieler. More details about some of the studies in that issue can be found below. 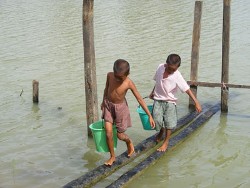 The study indicates that climate change is likely to considerably exacerbate regional and global water scarcity. For each additional degree of warming up to 2ºC above the present, an additional 7% of the global population will be confronted with a severe decrease in water resources. Climate change will also increase the number of people living under absolute water scarcity—less than 500m3/capita/year—by 40 to 100% compared to the effect of population growth alone.

The study shows a steep increase in some indicators of moderate impacts, between the present?day average temperature and 2ºC, while indicators of very severe impacts increase unabated beyond the 2ºC level.

The study highlights large uncertainties associated with these estimates, with both GCMs and GHMs contributing to the spread. GHM uncertainty is particularly dominant in many regions affected by declining water resources, suggesting that hydrological models must be further developed to improve water resource projections.

Ten percent of people are likely to live in a climate impact hotspot by century’s end, if greenhouse gas emissions continue unabated, according to a second ISI-MIP study also featured in the PNAS special issue on climate impacts. Many more are put at risk in a worst-case scenario of the combined impacts on crop yields, water availability, ecosystems, and health. The Amazon, Mediterranean, and East Africa are regions that might experiencesevere change in multiple sectors. Pictured below, a deserted drought-struck village in Mauritania, a potential hotspot of climate impacts. 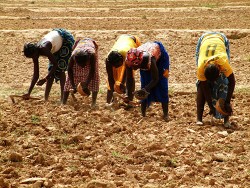 A third important project featured in the PNAS special issue examines how climate change will affect agricultural production, and thus food cost and availability. Past studies of climate change effects on agriculture produced substantially different results because of model, scenario, and data differences.

IIASA researchers working on AgMIP, a collaborator with the ISIMIP project, compared potential scenarios for future agricultural production using a variety of climate, crop, and economic models and identified gaps and inconsistencies. AgMIP aims improve substantially the characterization of world food security due to climate change and to enhance agricultural adaptation capacity in both developing and developed countries.

The project will also feature in a special issue of the journal Agricultural Economics.

Read this issue of Options