A pioneering collaboration within the international scientific community provides comprehensive projections of climate change effects, ranging from risks to crop yields to the spread of malaria. 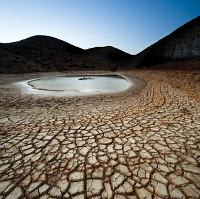 The analyses were published today in a special feature of the Proceedings of the National Academy of Sciences that assembles the first results of the Inter-Sectoral Impact Model Intercomparison Project (ISI-MIP), which aims at bringing research on climate impacts onto a new level. The ISI-MIP project is jointly coordinated by IIASA and the Potsdam Institute for Climate Impacts Research (PIK), and involves a consortium of researchers around the world.

More than 30 research teams from 12 countries systematically compared computer simulations of climate change impacts on a broad range of sectors.  The project builds on previous inter-comparison exercises from the fields of agriculture, hydrology, and ecosystems sciences. Results are combined to identify, for example, regional hotspots of climate change – the Amazon, the Mediterranean and East Africa - where several impact types coincide and potentially interact. Moreover, comparing models helps to understand the differences between them. For example, projections of impacts on food prices are affected by different assumptions about the intensification of land management or changes in international trade.  Elucidating the various influences of these measures could help to identify options for effective real-world policies.

“The climate change impacts picture remains far from complete, in particular with regard to socio-economic consequences,” says Pavel Kabat, IIASA director general and CEO, who co-edited the special feature and contributed to several papers. “The human costs of climate change are often triggered by the biophysical impacts, but are not identical to the impacts themselves. For example, water shortages in some regions might contribute to human conflicts and drive large-scale migration. We already have enough certainty today about climate change impacts to recognize it is high time to act.  But as scientists we will work hard to further integrate and strengthen the existing expertise to better see the elephant in the room – and just how dangerous the mighty beast really is.”  Read more from PIK.

Research highlights
IIASA researchers contributed to a number of the papers included in the special issue. For more information on IIASA’s work read the feature article, In the Human Interest, from IIASA’s Options Magazine, or read more from our partner institutions below.

Crop model study predicts strong negative effects on agriculture from climate change.
Results of a model intercomparison study indicate strong negative effects from climate change, especially in the tropics and at higher levels of warming where developing countries are concentrated. Simulations that include realistic nitrogen availability resulted in much more severe impacts from climate change in both temperate and tropical zones. This implies that developing countries, where nitrogen fertilization is low, will have greater challenges in developing effective adaptation strategies. IIASA researchers Christian Folberth and Nikolay Khabarov contributed to the study. Read more from AgMIP.

Lost freshwater may double climate change effects on agriculture
A warmer world is expected to have severe consequences for global agriculture and food supply, reducing yields of major crops even as population and demand increases. Now, a new analysis combining climate, agricultural, and hydrological models finds that shortages of freshwater used for irrigation could double the detrimental effects of climate change on agriculture. IIASA researchers Christian Folberth and Nikolay Khabarov contributed to the study. Read more from the University of Chicago.

Modelling the effects of climate change on agriculture
Meeting the world’s growing demand for food in coming decades is likely to become more difficult as already stressed agricultural systems will be challenged by population growth and increasing individual consumption, shows a new comparison of climate and agricultural models released as part of the ISI-MIP special feature. Climate change will exacerbate the challenges in many dimensions. However, are the effects of climate change more serious than other threats to sustainable food security? IIASA researchers Christian Folberth and Hugo Valin contributed to the study. Read  more from AgMIP

Identifying climate impact hotspots
One out of ten people on Earth is likely to live in a climate impact hotspot by the end of this century, if greenhouse gas emissions continue unabated, according to a new study by researchers from the Potsdam Institute for Climate Impacts Research (PIK), IIASA, and others. Read the full press release from IIASA and PIK.

Read more on the project in IIASA's bi-annual magazine, Options.

Recognizing the Elephant in the Room: Future Climate Impacts across Sectors

Modelling the effects of climate change on agriculture