During his visit to the Institute the Minister will meet with the new Director of IIASA, Pavel Kabat, several research leaders from the the Institute, and representatives from the Austrian Academy of Sciences, IIASA Council Member for Austria Prof. Gerhard Glatzel and immediate past Council Member, Prof. Kurt Komarek.

Austria was a founding member of IIASA when it was established in 1972. Membership is through the Austrian Academy of Sciences with funding provided by the Federal Ministry for Science and Research. 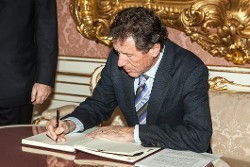 Discussions will focus on IIASA’s current research strategy, which aims to provide science-based insight on issues of global change, specifically climate and energy, food and water, and poverty and equity, as well as on on enhancing the contribution of IIASA to the Austrian science and research infrastructure.

“It is a privilege for Austria to host such an important international research organization as IIASA. It has accomplished a lot in the past decades through providing insights into and possible solutions for the “grand challenges” of our time, such as climate change, social wellbeing or sustainable energy supply”, said Minister Töchterle. 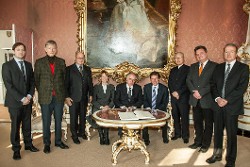 “It is a great pleasure to welcome Minister Töchterle to IIASA and to discuss some of the research that the Institute is undertaking. We welcome his thoughts on how IIASA can support him in his portfolio. This visit also provides an opportunity to enjoy the historic premises that IIASA is so fortunate to occupy, courtesy of the Austrian Government.  I look forward to further interactions with the Minister and take this opportunity to thank him for his support of IIASA’s 40th Anniversary Conference, which will be held from the 24-26th October 2012,” said Prof. Kabat.

Prof. Kabat, from the Earth System Science and Climate Change Group at Wageningen University and Research Centre in the Netherlands, commenced his appointment as the new Director of IIASA on February 1. He brings to IIASA expertise in many aspects of global change, specifically the interaction of humans with the natural environment – an interaction that is at the heart of some of the most intangible issues facing science and policy communities today, such as the sustainable management of food and water resources, and energy access, issues that are also of concern to Austria and its close neighbors.