Energy from the Sahara Desert? New study to explore the risks

In the future, Europe might get a large part of its energy from solar and wind farms in the Sahara. IIASA researcher Anthony Patt has received a major EU research grant to examine the risks and consequences of such a project. 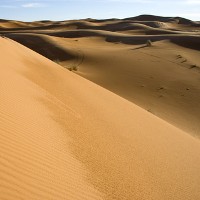 Laxenburg, Austria. In one vision for a carbon-neutral future, mirrored solar panels glitter across the Sahara Desert and turbines tower over the wind-blown landscape. Extensive new renewable energy sources in North Africa and the Middle East would power the growing population there, while also providing clean electricity to Europe and cutting greenhouse gas emissions from electricity to near zero.

The idea would bring European investment into renewable energy projects across the Mediterranean Sea, providing an elegant solution to the region’s future energy challenges. But would it work? What are the risks of embarking on such a project? IIASA researcher Anthony Patt has been awarded a €1.5 million European Starting Grant from the European Research Council to find out. During the five-year research project, called Social challenges of trans-Mediterranean renewable power cooperation, Patt and a team of IIASA post-doctoral researchers and graduate students will investigate the economic, social, and development implications of such a huge investment in renewable energy in the Middle East North Africa (MENA) region.

The idea to collaborate on renewable energy across Europe and the MENA region grew out of several major problems. First, Europe needs to cut its greenhouse gas emissions from electricity to near zero in order to meet goals for mitigating climate change. That means switching from coal-fired power plants to non-carbon based energy sources, including renewables. While Europe has already begun developing renewable energy, solar and wind power alone cannot provide all the power for the region.  Patt said, “Europe has the challenge with renewables of potentially not having enough land.  It is a densely populated continent without particularly strong wind or particularly strong sunlight.”

Meanwhile, the population of North Africa and the Middle East is growing rapidly, demanding more and more electricity in an already underdeveloped region. “They are going to need to build a lot more capacity to generate electricity,” said Patt.

Patt was involved in workshops where people first started discussing the possibility of investing n renewable energy production in the MENA region to support both European and MENA goals. Early research suggested that economically, the idea could work well. The Sahara Desert and surrounding area has large areas of land, ample sunlight, and strong wind that could be converted to electricity. But what about the social and political challenges of cooperating across such a large, diverse region? He said, “No one was really talking about the risks that are associated with it. What are all the things that could go wrong? Those actually could be ultimately the reasons why any attempt to do this could fail, or why 20 years from now we might wish we had done something different.”

Potential risks include energy security risks, economic development risks, and environmental risks. For example, Europe’s energy security could be threatened if the region became more dependent on the Middle East for energy. Politically, that could squelch support for such a project in Europe.

In the MENA countries, another risk is that renewable energy development would actually be bad for the local economy, contributing to government corruption, or bringing in fewer jobs than expected. “There’s a lot of evidence that developing countries which are rich in natural resources end up developing less than countries that are poorer in natural resources,” Patt said.

Finally, even renewable energy sources have impacts on the environment. Wind towers and solar panels might damage a delicate desert ecosystem, and Concentrated Solar Power (CSP), the type of solar power that would be used in the Sahara, requires water—a precious resource in the arid desert.

During the five-year project, Patt and his team will start out by examining the potential risks, and then look for solutions that could help alleviate those risks. The researchers will use a combination of computer models, which can estimate factors like water use and energy system impacts, and interviews and workshops with policymakers and people who would be affected by the project. In the end, the research will help establish whether renewable energy in the Middle East and North Africa is worth pursuing, and if so, how to avoid the major potential problems. It could also provide guidance about future energy development in general.

European Research Council Starting Grants fund independent research by young scientists within 12 years after earning a PhD. The funding program aims to support younger researchers at a key stage in their careers, as they build research teams and transition from their early career to more senior roles.  For more information, visit the European Research Council Web site.