How will science and technology shape our global future? 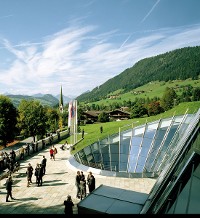 From 22 to 26 August, 2012, IIASA Director and CEO Prof. Pavel Kabat and IIASA World Population Program leader Prof. Wolfgang Lutz will present their researchand join in discussions at the Alpbach Technology Forum in Alpbach, Austria, an internationally-focused meeting related to science, technology, and society.

On Friday, 24 August, Kabat will join top researchers and policymakers in a working group entitled “Smart City – human beings at the focus of attention.” The group will discuss the future of cities in a world of shrinking natural resources and changing climate. How can cities adapt to provide their citizens with energy and transportation in a sustainable way? Research by Kabat and colleagues has shown that energy supplies are vulnerable to reduced river flows and higher water temperatures resulting from climate change. One way to adapt, Kabat has suggested, would be to transition from freshwater sources of energy to saltwater, or to more efficient gas-fired power plants. Following that discussion, Kabat will join in a second panel entitled, “Supporting Careers in Science,” which includes Barbara Weitgruber, Director General for Scientific Research and International Relations at the Austrian Federal Ministry of Science, Karlheinz Töchterle, Austrian Federal Minister for Science and Research, and Helmut Denk, president of the Austrian Academy of Sciences. On Friday evening, Kabat will participate in an event entitled “Was Alles ist Wissenschaft?” in which speakers will discuss scientific traditions, trends, and interdisciplinary science. On Sunday, 26 August, Kabat will attend the opening of the political symposium “Providing for Future Generations,” at which Federal President of the Republic of Austria, Heinz Fischer, will give the opening remarks.

Changing populations and the future

How will changing populations affect future innovation and economies? As populations in Europe age and start to decline it becomes even more important to invest in education and human capital in order to enhance productivity per worker and compensate for the declining number of workers. Lutz’s research suggests that while populations in Europe are beginning to decline, education levels may have a greater effect on economies and innovation.On Wednesday, 22 August, Lutz will give the opening keynote speech at the related Alpbach University Forum with a focus on international migration. He will also discuss his research on these topics as part of a working group on 24 August called “Demographics and human resources as an opportunity for innovation.” The working group will discuss how to turn population changes into opportunities for innovation in society.

The Alpbach Technology Forum is an internationally-focused forum for science and technology in Austria, running from 23 to 25 August, 2012. The event is part of the larger European Forum Alpbach, which runs from 16 August to 1 September, focusing on the future for young people worldwide. For more information, visit the European Forum Alpbach Web site. The conference program (PDF) is available.

The event is being livestreamed from the Alpbach Web site: http://www.alpbach.org/index.php?id=conovalivestream.

About IIASA
IIASA is an international research institute that conducts inter-disciplinary scientific studies on environmental, economic, technological and social issues in the context of global change. Key areas of investigation include climate change and energy, food and water, and poverty and equity. IIASA is suppported by National Member Organizations (NMOs) in 19 countries, covering Africa, the Americas, Asia, and Europe. More about IIASA at previous.iiasa.ac.at