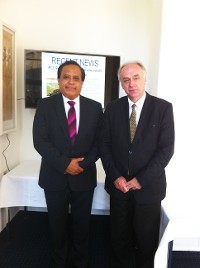 Charge d’Affaires of the Indonesian Permanent Mission to the United Nations and Other International Organizations in Vienna, Aris Munandar, announced Indonesia’s acceptance of the invitation to become a member of IIASA on behalf of the Government of the Republic of Indonesia on 25 June 2012. “We believe that our membership in IIASA will give strategic importance for Indonesia’s international standing as well as strengthen the capacity to develop high quality policy-oriented research and responsible policy-making,” he said. (Photo: Charge d’Affaires of the Indonesian Permanent Mission in Vienna, Aris Munandar, and IIASA Director/CEO, Pavel Kabat, following the announcement of Indonesia as IIASA’s newest national member. )

Membership of IIASA enables member organizations to help set the Institute’s research priorities, build the scientific skills of their countries’ researchers through IIASA’s academic training activities, and gain enhanced opportunities to collaborate with the Institute.

“We also believe that membership of IIASA, with its research focus on energy and climate change, food and water, and poverty and equity, will deliver significant added-value to the policies to implement our President’s ‘ green economy’ vision,” commented Mr Munandar to the IIASA Council, the Institute’s governing body.

Director/CEO of IIASA, Professor Dr Pavel Kabat and Chair of the IIASA Council, Professor Dr Peter Lemke, welcomed the new membership, stating they will strengthen IIASA’s ties with the Asia Pacific Region. “IIASA has an impressive record of building scientific bridges across countries to use research to provide insight and guidance to policymakers facing the challenges of our changing world. Both Indonesia and IIASA will benefit from this new arrangement with, for example, Indonesia’s scientific community accessing the skills and networks that IIASA holds, and Indonesia adding a valuable new geo-political perspective to IIASA’s mission.”