Integrating science and policy to address the impacts of air pollution

An article in this week’s Science magazine examines how science and policies address air pollution effects on human health, ecosystems, and climate change in Europe. 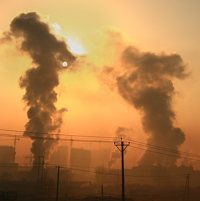 IIASA researchers Markus Amann and Zbigniew Klimont contributed to the article in this week's Science magazine, which was led by Dr Stefan Reis of the NERC Centre for Ecology & Hydrology and included researchers from five other European countries.

In their Policy Forum commentary the researchers discuss how working together, scientists and policy makers have developed and implemented policies to improve air quality and reduce the impacts of air pollution on human health and ecosystem over the last decades.

Employing the GAINS model (and its predecessor RAINS), IIASA has developed scenarios of cost-effective emission controls which serve as a quantitative input to negotiations on specific commitments to reducing air pollution and greenhouse gases.

Amann said, “We have gone a long way from analysing impact of single species, such as sulphur, on ecosystems, to a cocktail of pollutants affecting environment and human health, most recently extending the framework to consider climate implications of discussed air pollution policies.”

The authors conclude that substantial improvements have been made, for example in reducing deposition of acidifying substances on soils and ecosystems in Europe since the 1970s. However there are still major challenges ahead. For example, emission levels of air pollutants in 2020 will still lead to an average loss of life expectancy by about 4 months, while excessive nitrogen deposition will put more than 40 percent of Europe’s nature at risk.

Klimont said, “Meeting our long-term air quality and ecosystem targets remains a priority. However, we need also to explore further the synergies of climate and air pollution policies.”

The article highlights several examples where successful collaboration between scientists and policy makers is required to develop cost-effective air pollution policies that address serious environmental issues. Their priority list includes the need to further reduce nitrogen emissions, for example in the form of ammonia from agriculture, which will help to bring down acidification of soils and eutrophication of terrestrial, freshwater and marine ecosystems.

They also discuss the requirement for integrated policies working on the interactions between air pollution and climate change which would help reduce short-term climate forcers such as Black Carbon and ozone. They suggest that the United Nations Economic Commission for Europe's (UNECE) Convention on Long-range Transboundary Air Pollution (CLRTAP), a multilateral agreement aiming to reduce air pollution across the UNECE region, needs to work in partnership with the United Nations Environment Programme (UNEP), the Organisation for Economic Co-operation and Development (OECD) and conventions covering biodiversity, the marine environment and water.

Reis said, “The long-term collaboration of scientists and policy makers in the different task forces, working groups and other bodies of the Convention is crucial in forming a robust science-policy interface. Building trust in scientific results and a fostering a better understanding of the policy process ultimately leads to better, more efficient policies.”

IIASA is an international scientific institute that conducts research into the critical issues of global environmental, economic, technological, and social change that we face in the twenty-first century. Our findings provide valuable options to policy makers to shape the future of our changing world. IIASA is independent and funded by scientific institutions in Africa, the Americas, Asia, Oceania and Europe. previous.iiasa.ac.at

Copies of the embargoed paper may be distributed only by the AAAS Office of Public Programs, to working journalists. Please call +1-202-326-6440 or email .

IIASA's Zbigniew Klimont talks about the benefits of addressing climate change, at the IIASA 40th Anniversary Conference in October