IIASA is an international scientific institute based in Austria that conducts research into humanity's most pressing problems. The collaboration brings together two organizations dedicated to building a better world.

One of the Vienna Philharmonic's stated missions is to communicate the humanitarian message of music into the daily lives and consciousness of its listeners. As Goodwill Ambassador, the orchestra will help raise awareness of IIASA, a scientific research institute established 40 years ago in the orchestra's own home country of Austria. 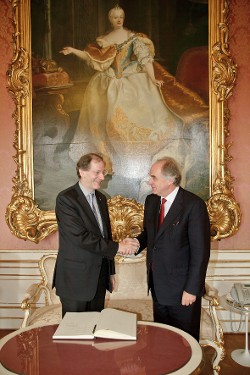 Prof. Hellsberg said, "The decision of the Vienna Philharmonic to accept the prestigious invitation to act as Goodwill Ambassador of the IIASA is an expression of the orchestra's respect for the activities of the institute, based on the conviction that the work of the IIASA represents hope for countless individuals as well as the planet on which we live."

IIASA’s international scientists are world leaders in research on planetary challenges like hunger, air pollution, climate change, and human security and development. The institute brings together researchers from all over the world and many scientific disciplines to conduct cross-cutting research that reaches across national boundaries.

The new partnership brings together music and science to act as catalysts for innovation. Science seeks to understand the world at an intensely intellectual level. Music lets the spirit soar into realms unfettered by the objective and self-imposed limitations of the mind.

Photos Marking the Partnership between the Vienna Philharmonic and IIASA

Music and science partnering for humanity