In the early 1970s warnings of global cooling appeared in the media, as some scientists concluded the Earth was gradually heading toward a new ice age. Yet, by the end of the decade, global warming was scientifically recognized as a major problem – IIASA research helped shift opinion toward "global warming." 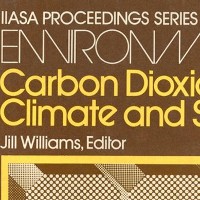 Climate change is complex. The science of climate change crosses national boundaries and spans academic disciplines. And it was only in the 1970s that scientists from different disciplines recognized the huge complexity of the planet’s environment and began to work closely together.

Wind patterns, melting ice sheets, ocean circulation, soil respiration, clouds—scientists were discovering that, as far as climate was concerned, everything seemed to interact with everything else. In addition, researchers were learning that an increase in temperatures could set off other even more serious climate-warming mechanisms. No longer could climate scientists study climate change in isolation.

As the natural science of climate change began to come together in the mid-1970s, two key questions were raised that researchers had scarcely examined in any depth. What were the practical implications of climate change for human beings? And how could human beings influence climate change over the coming decades? After all, changes to the climate take place over decades and centuries, during which time societies and economies also change significantly. 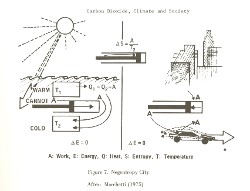 One of Cesare Marchetti's diagrams in the IIASA 1975 book. It is entitled: Work, Energy, Heat, Entropy, Temperature

For governments, answers to these questions were crucial to bridging the gap between science and government policy. And so, in 1978 the White House asked the United States National Academy of Sciences for advice on what was then called the carbon dioxide problem. The Academy appointed economist, Tom Schelling, now a Nobel Laureate, to investigate.

In his research, Schelling came across the International Institute for Applied Systems Analysis (IIASA). “I never, at the time, discovered any other research organization that had done integrated work on the subject (the carbon dioxide problem),” he recalls in an article in Technological Forecasting and Social Change. He goes on to argue that only at IIASA, where different disciplines work alongside each other, was the proper scientific attention placed on a problem that spans all disciplines.

In the 1970s IIASA provided the arena to bring together natural and social scientists. It also brought together different nationalities. “With something as global as climate, nobody would have got far without involving both the east and the west in sorting it out,” observes William C. Clark, a Harvard University professor, who was at IIASA in the 1970s and 1980s. At this time IIASA was one of only four international organizations working in this area, the other three being the United Nations Environment Programme, the World Meteorological Organization, and the International Council of Scientific Unions.

IIASA did not simply provide the place for researchers to collaborate; it was also a valuable provider of research. Unlike the other three international organizations, whose work focused mainly on the natural science of climate change, IIASA led a sustained research effort into how climate change would affect human beings and also into what could be done about it.
In 1979, using far simpler models than today’s sophisticated models, IIASA predicted temperature rises of between 1°C and 4°C by 2050. This range of increase has remained remarkably constant, with the latest report of the Intergovernmental Panel on Climate Change (IPCC) in 2001 predicting temperature rises of between 1.4°C and 5.8°C by the end of this century. Although this may have more to do with stickiness (the tendency for findings, once stated, to resist modification even in the face of new evidence) it shows the influential role of being first to research an area.

IIASA’s models were just part of its larger investigation into the impact the world’s energy system would have on our climate, which in turn was part of IIASA’s, and indeed the world’s, first comprehensive, truly global assessment of energy issues. 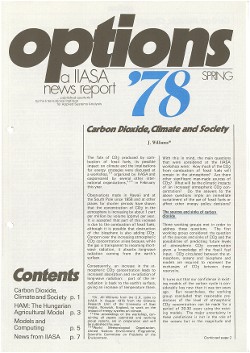 In February 1978 IIASA held what has turned out to be the key conference, “Carbon Dioxide, Climate, and Society.” The conference culminated in one of the earliest international assessments of the climate problem, with 40 authors from 11 countries contributing technical papers. “Although we now know many more details, the prevailing assessment of overall climate sensitivity and biogeochemical apportioning of emissions has changed only modestly since IIASA issued its climate report,” wrote Clark and Jill Jäger, who led IIASA’s Energy and Climate Subtask in the 1970s, as they reviewed part of the IPCC’s Second Assessment Report written nearly 20 years later.

Many of the issues raised at that conference are still discussed today. The use of alternative, renewable energy sources such as biomass; carbon capture and storage; how to reduce the world’s energy demand—even uncertainty, which dominated and still dominates every aspect of climate change from emission rates through environmental consequences to the socioeconomic impacts themselves. Indeed, the conference examined what are the tolerable rates of burning fossil fuel that will keep governments’ options open for developing effective energy strategies at some future point when climate change is better understood.

Subsequently, IIASA’s work became foremost in demonstrating to governments the error of adopting energy policies that emphasize the use of fossil fuels. Such mistaken policies needed to be revised because of the impact of burning fossil fuels on the climate.

Other IIASA research in the 1970s was equally pioneering. At the beginning of the decade, there was the work of the man the Economist calls the father of climate change economics, Bill Nordhaus. Many of the currently dominant climate change policy models trace their conceptual and methodological roots to models developed by him at IIASA. “My own first serious research on global warming started when I spent a year in Vienna at IIASA,” remembers Nordhaus. “Research on global warming is deeply interdisciplinary, and IIASA at that time was uniquely able to foster interdisciplinary work. It was here that I published my first (and I believe the first) economic model of global warming as an IIASA working paper in 1975.”

In 1976 IIASA scientist Cesare Marchetti proposed collecting CO2 from the burning of fossil fuels as it was released. Once captured, the CO2 would be injected into certain ocean currents that carry and spread it deep into the ocean to be stored for hundreds of years.
Says Jill Jäger: “By 1979, IIASA’s research had fed into the Charney Report, the first major study on global warming by the US National Academy of Sciences, and on to the agenda of the World Climate Conference in Geneva.” The Charney Report and the Geneva conference marked the emergence of a new scientific consensus. Both concluded that the dangers of increasing CO2 levels would lead to possibly major long-term changes in the planet’s climate.
However, it was not until nearly 10 years later that climate change emerged from the scientific community and fully entered the mainstream political agenda with the founding of the Intergovernmental Panel on Climate Change (IPCC) in 1988. During this period much?needed research gathered pace.

Again IIASA played a key role, this time at an international conference in Villach, Austria, in 1985, where 89 scientists from 23 countries gathered to speak independently, free from government constraints. In a conference statement, the scientists forecast “significant warming” and warned climate change “would have profound effects on global ecosystems, agriculture, water resources and sea ice.” William C. Clark from IIASA was invited to give the keynote presentation on the practical implications of the carbon dioxide question.

The New Scientist writes that the Villach conference was key to recasting climate change as a problem for today and that it led to the establishment of the IPCC. Says Clark: “It moved the science into the policy arena.”

But this was nearly a decade since IIASA’s first research project into climate change—work that continues today.

Read more from this issue