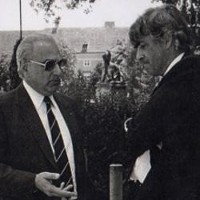 It is July 1973, and I have arrived at IIASA, with my crew of Bill Clark, Dixon Jones, wives, and a programmer, Zafar Rashid. Howard reminds me I must put on the first organizational meeting of the Ecology Project in a few weeks, and I begin to be anxious because the Conference Dragon was on holidays. Eventually she arrives and I am instantly relaxed and google-eyed.

The early days of IIASA were pioneering, crazy and smart. Howard chose staff roles and people brilliantly. Silfver Newton arranged the ski trips, which to me were essential, even though I cannot ski. That’s where some of the memorable jokes played out with double litres drained. One involved several IIASA men, including, I remember vividly, the Secretary of the Institute, Andrei Bykov (dubbed 007), Mike Fiering and me. We had identified an Austin Mini car parked outside the Gasthaus and proceeded to lift it up the steps and plunk it down in the lobby in front of the welcoming desk. This was very late at night or maybe even in the early morning, and no one saw us. Happily I cannot remember what eventually happened when it was discovered.

But some jokes happened at the Schloss. One was the appearance of a big, round, smooth rock, a gray conglomerate about 40 cams in diameter, embedded with red stones each about half a centimeter. A noble rock donated by the oldest Canadian scientific organization, the Canadian Geological Society, to the youngest scientific organization, IIASA. It was discovered in the northern wilderness of Canada and carted by dog-sled and railway and car and plane and truck to Laxenburg in IIASA’s first year. It was lovingly – and suitably – named the ‘Canadian Knoedel’ by some Austrian jokers and resided on a Plexiglas stand in front of the Director’s office for years.

Another was the lesson in yodeling that Mike Fiering and I got from an accomplished gentleman while a US ambassador (not to Austria, incidentally) was visiting Howard. Howard had asked us to give this gentleman a briefing, we had declined, ostensibly because of another meeting with another distinguished guest. That of course was the Yodeler who gave us the lessons just outside Howard’s office. The doors to Howard’s office opened and there the three of us were, practicing. The Ambassador was thoroughly fascinated, cancelled his air ticket and joined us for an afternoon of yodeling.

And then, of course, there was the Ralf Yorque Society. It was created at home when a grad student described his inauguration on a university oceanographic vessel. The inauguration required him to go to the stern in rough weather and exclaim, with retches, YORQUE over the fan tail. The society was created at that time and then was firmly established at IIASA with a signature t-shirt created by Jim Thompson. A Ralf Yorque newsletter was soon created by Ulrike Hilborn. It highlighted peoples’ famous and infamous activities and was a runaway hit - and raised eye brows.

The Memoirs of C.S. Buzz Holling