It is with profound sadness that IIASA marks the death of Professor Ishfaq Ahmad on 18 January. As a former IIASA Council member, former President of the Pakistan Atomic Energy Commission and former Advisor to the Prime Minister, he was a great supporter of IIASA. 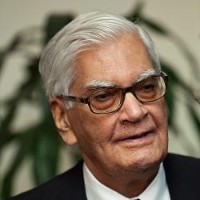 As a nuclear physicist, Professor Ishfaq Ahmad played a key role in the achievement of Pakistan's nuclear capability and development of the nuclear program. He served as a Science Advisor to the Prime Minister from 1996-2001 and again from 2008-2013 and was President of the Pakistan Academy of Sciences from 2007-2010. His accomplishments have been recognized on many occasions, with one of the most notable being the three highest official awards in Pakistan: the Sitara-i-Imtiaz (1989), the Hilal-i-Imitiaz (1995) and the Nishan-i-Imitiaz (1998).

Ahmad also pioneered and led various important programs in nuclear power, agriculture, health care, research and development. In this capacity, he played a leading role in developing the cooperation between IIASA and Pakistan resulting in Pakistan becoming a member of IIASA in 2007 via the Pakistan Academy of Sciences. Ahmad then served as IIASA Council Member for Pakistan from 2007 to 2012. From 2007-2015, areas of collaboration between IIASA and Pakistan included:

Director General and CEO of IIASA Professor Dr. Pavel Kabat expressed his sorrow at the passing of Ahmad, saying: "His legacy as an eminent scientist and key force behind Pakistan’s collaborations with IIASA will not be forgotten. He will be greatly missed."