It is with great sadness that IIASA marks the death of Tibor Vasko on 18 March 2019. As a signatory of the IIASA Charter and later as an IIASA honorary scholar and Dean of the Young Scientist Summer Program, Vasko’s passing is a profound loss to the institute and the field of science diplomacy. 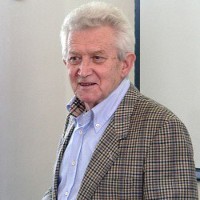 Vasko was the signatory for the former Czechoslovakia when the IIASA Charter, which established the institute, was signed on 4 October 1972 at the Royal Society in London.

"I represented the Czechoslovak Socialist Republic. Now there is no Czechoslovakia and not so many socialists, but there is still IIASA, which proves how robust and resilient the founding fathers' ideas of cooperation and mutual benefit were." Vasko recalled in 2016. 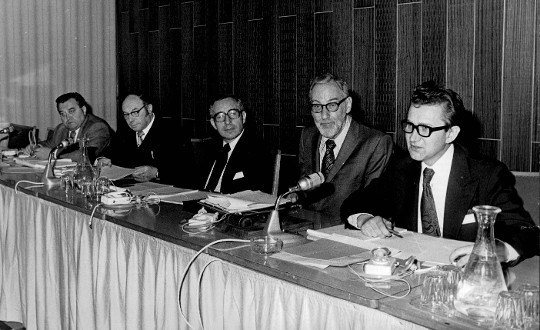 Vasko went on to have an active career at IIASA until his retirement, ultimately as an honorary scholar working on a project supporting the transition of the economies of the former eastern bloc to the market system. He was also the first Dean and Scientific Coordinator of the IIASA Young Scientists Summer Program (YSSP) and retained a committed interest, visiting IIASA for the program’s 40th anniversary in 2016.

The current Director General of IIASA Albert van Jaarsveld expressed his sorrow at the news, saying: “Vasko’s passing is a great loss for the field of science diplomacy. His contributions to the achievement of the ambitious research vision of IIASA will live on in the mandate of the institute, as we continue to build bridges across political divides through international scientific cooperation to address the challenges of our time.”

“IIASA managed to 'tunnel' new useful ideas through the ideological barriers during the Cold War. The iron curtain does not exist anymore, but there are many barriers left between people, nations, and religions that hamper the search for solutions to many pressing problems; therefore, there is still a need for IIASA's ability to tunnel useful ideas through various barriers, whatever character they may have.” – Tibor Vasko at a talk given to YSSP participants at IIASA in 2007.

IIASA and its staff owe Vasko a debt of thanks. He will be sorely missed.

“Tibor’s demise is an irreparable loss to IIASA’s family of exemplary researchers. He was indeed one of the pioneers that contributed towards IIASA’s status as a renowned scientific think tank. His humanitarianism, pacifism, collegiality, spirit of fairness and noble character have always admired and appreciated by us all. It was indeed a privilege to have been associated with this great international personality and a prominent representative of the Czech people. He will always be remembered.” - Sebouh Baghdoyan

“I am so privileged to have known Tibor. He was a great inspiration to us all. I am so sad to hear of his passing.”- John Clark

"With Tibor, we have lost a wonderful colleague and friend, as well as a strong and reliable supporter of the Institute. I feel privileged to have had the opportunity to work and spend time with Tibor." - Walter Foith

"We stayed in contact all over the years…. My last message to Tibor was on his 88th birthday this year. I just wished him happy birthday and good health, actually in Hungarian… that we every now and then used.
I started to work in IIASA in April 1978 in the IIASA Secretariat under Andrei Bykov, who was the first Secretary of the Institute.
It was either in May or June 1978 that I got to know Tibor, who was at that time the IIASA Council Member from Czechoslovakia.
Actually my father told me - before I met Tibor - that he knows him very well as they had worked together in the high level management or board of the Ryad project, which was a project among the the Soviet Union and the Eastern European Social countries to establish an IBM compatible mainframe series (which was actually a quite successful project). My father told me, that I should pass Tibor his best regards and I can do that in Hungarian because Tibor also speaks Hungarian well.
I really liked his Hungarian. So much from his personality came through when he spoke in that language. First, he always apologized, that his Hungarian was not good enough...., and that he learned it only when he was a child, and he never uses it, and it is only his “x”th language, and then he started to speak very well. His pronunciation was especially good as he learned the language as a kid, but his vocabulary in some topics was limited, and then he was searching for words. It was an effort for him to speak on more sophisticated topics like computers, but he made that effort just in order to please his speaking partners. So in practice, based on the subject, we switched often in the same conversation between English and Hungarian.So, this combination of extreme modesty and high degree of knowledge, wisdom, warmth, taking care of others was, for me, something really touching.
In our usual email exchanges last Christmas, he even gave me good advice on some IIASA related matters. And that was usually in English… but surprise, his last advice to me last Christmas was in Hungarian.
It is very sad that one of the last individuals from the “founding” generation of IIASA has left us. Dear Tibor, RIP." - Istvan Sebestyen

As Leader of Clearinghouse and Networking Activities (CLH), Tibor was my supervisor at IIASA from 1985 until he transferred to the Economic Reform and Integration project in 1991.
In Tibor’s own words, the principle role of CLH was “to bring together respected scholars and analysts with industrial, government, and other officials to explore selected issues which [were] not on IIASA’s own research agenda” (for further details, see Vasko, T., IIASA as Catalyst, Options, 1984(4): 6–9.) Among other tasks, this involved organizing – and attending – international meetings or conferences on such diverse topics as life cycles and long waves in economics, energy strategies for sustainable food production and, following the fall of the Iron Curtain, regional development in Central and Eastern Europe. The venues of these events ranged from Siena (Italy), Weimar (GDR), Montpellier (France) and Akademgorodok, Novosibirsk (USSR) to Berlin and Štrbské Pleso in the High Tatras (CSFR), to mention but a few. Tibor was also responsible for co-authoring and/or editing the ensuing publications (including two books on the issue of long waves, published by Springer-Verlag). In addition, numerous other IIASA publications carried his name. References to all these can be found in IIASA’s Publications Repository.
Although his academic background was in electrical engineering, Tibor proved knowledgeable on a multitude of subjects and immersed himself in the respective topics with enthusiasm, earning himself great respect on all sides. His fluency in a variety of languages coupled with his ease of communication and unpretentious and open manner were further invaluable assets, which also led to many new friendships within the scientific community.
All those who met him could not help but be charmed by Tibor’s warmth, kindness and humor. He was extremely popular at the Institute, in addition to being well-known as a true mushroom lover and expert, who could always be consulted in case of doubt!
I recall that shortly after the fall of the Iron Curtain, Tibor organized an excursion to Budweis on a public (and Institute) holiday. Anyone from IIASA who wished could join, as long as there was room in the bus. Included in the trip was a visit to the famous brewery. We must have been one of the first groups, if not the very first, from the ‘West’ to enjoy a guided tour there. The hospitality – and the fresh draught beer – were amazing. Thanks to Tibor, this was a memorable experience.
Going back further, another noteworthy event comes to mind. On the occasion of the international conference that took place in 1988 in Akademgorodok (literally ‘Academic Town’), in honor of the official rehabilitation of Nikolai Kondratieff (the original proponent of the theory of long waves), two receptions were held. The first one, by way of a welcome, was organized by our hosts; the second, at the end of the conference, was hosted by IIASA. During our overnight stopover in Moscow, Tibor dropped by a special store reserved for Comecon diplomats, where he was entitled to shop. There, with our reception in mind, he filled two suitcases with a generous selection of alcoholic drinks. Whereas the official welcome reception was strictly non-alcoholic (due to the ‘dry law’ introduced by Mikhail Gorbachev) and lasted less than two hours, Tibor threw a truly magnificent IIASA party that lasted until well into the night and surely remained unforgettable to all who attended and enjoyed the vodka and cognac from Tibor’s suitcases!
On a more personal level, I could not have wished for a better ‘boss’. Although my superior, Tibor treated me as a colleague and equal, as well as never failing to show his appreciation for a job well done. It was a pleasure and honor for me to work with him. Our association lasted well beyond the time at IIASA and we remained friends over the years.
Tibor was a very special person. It was with a very heavy heart indeed that I learned of his passing. He leaves a large void in my life and – I venture to say – in the lives of all those who knew him. - Vivien Landauer

Please share your messages of support or memories of Tibor Vasko in the space below.