In Memory of Danny Caacbay 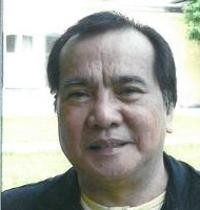 This is the transcript of the Eulogy that Arthur Munkenbeck, former IIASA colleague and friend, read at Danny Caacbay’s Memorial Service on June 1st, 2015.

Before I begin I want to tell you how much I struggled to find the right words for this address. I sought advice from a friend who had lost her partner last year. He told me “The less said the better”. Unfortunately I can’t do that so please bear with me if I seem to go on too long.

It’s very difficult for me to stand here before you and say goodbye to my best friend. It is also a great honour that Virgina, Janina and Davi asked me to say a few words about Danny. Where do I begin to explain a friendship that lasted over 37 years, more than half of my life.

Danilo, Danny, Caacbay, born 1948 in Manila in the Philippines, Arthur Munkenbeck born 1948 in Brooklyn, New York. Geographically and culturally we were worlds apart. I had to agree with Danny when he insisted that the Philippines had better food, prettier women (as he always pointed out), people who could sing better (except for Danny), dance better (Danny could), and were generally more open and warm and happy. What did a boy from New York City have, besides his good looks, in common with Danny of another world?

How about love, loyalty and utmost respect for each other. And humour! We both loved sarcasm, exaggeration of facts, silliness. After work we would sit with a cold beer in hand talking about everything and nothing looking forward to enjoying each other’s company for the rest of the evening or until he got a call from home (saying dinner was already on the table).

I met Danny in the late 70s at our place of employment, IIASA. By that time he had been hired as a technical engineer for what was then called the Computer and Telecommunications Department responsible for Computers and Telephones, all the things I couldn’t care less about but were of vital importance for the smooth running of the institute. I would often see him at the end of my work day installing special computer cables throughput the long narrow corridors of the Schloss. Yes, our work place was something unique. We worked in Schloss Laxenburg which was a Habsburg residence until 1918. The people who worked at the Institute were also special. There were Noble Prize recipients, world renowned scientists who worked on projects that were new, international, exciting and relevant to our times. Danny knew everyone at the Institute from the everyday staff members to the top scientists and directors. And everyone knew and appreciated Danny. People loved talking to Danny. He had an uncanny ability for recollection. Names, faces, facts could be recalled in a flash that often astounded me and certainly impressed the IIASA community.

At first I couldn’t believe that Danny could talk with such authority to scientists on the reports they had published at our Institute. But Danny had a keen interest in reading many of these reports and with his engineering background he could digest and refer to them throughout his career in IIASA: He once started to tell me about a report that claimed it could be possible to extract hydrogen energy from trees. I asked if they could extract beer from trees as well and that was the end of that topic.

One of Danny’s most wonderful traits was his charm. Boy did that guy have charm! Old school charm. It overflowed and bathed everyone who was in his presence. “Waiter, could you please bring me Roses for all the woman at the table!”. He had an acute awareness, a sensitivity to the needs of others. He was generous, very generous. Almost to a fault. Sometimes I thought “I hope Virginia doesn’t find out about all the Mercedes that Danny bought for us.” He gave from his heart – he would often correct me by saying “Art, you don’t give to others, you SHARE with others.” Well Danny you did a gigantic amount of sharing in your lifetime. I hope I shared something back with you.

So Danny should I tell them about the sporting side of your personality? Ok, I wouldn't call Danny the most athletic guy I've known but in the early years he was quick enough for our basketball club. We played for the WIENER BÖSEN KURIER TEAM, affectionately known as the GELBIES because of our awful yellow jersies that looked only good on Danny. We were in the lowest Wiener Division and were there because we wanted to have fun, which was totally frustrating for our coach who wanted to win. Danny invented the famous play number 2 which became the key to our success, it went like this: Danny would dribble the ball to half court, where we would raise his arm and point two fingers in the air. This was a sign for the entire team to rush and stand directly under the opponent's backboard. Danny would then proceed to throw or chuck the ball somewhere in the vicinity of the basket which meant it usually landed in the grandstand. Everyone thought this was the funniest thing in the world except the coach.

Danny and I have been members of an International running group called the Hash House Harriers. We have been part of that group since it began in Vienna back in 1982. Danny actively participated until 2012 when his debilitating illness made it impossible for him to run anymore. Nevertheless he would still attend events and bring along his wit and laughter. We often travelled and ran together with other Hashers in many different countries. His favourite group, bar none were runners of the Zagreb Hash House Harriers of Croatia, people who we have run with for over 25 years. They loved Danny and made him a honorary member. Tonight at 6.p.m., the Zagreb Hash will have a special memorial run to honor their dear friend.

Danny was a proud person but not vain. Well he did like to wear, what I would call in my staid manner, flashy clothes. Coming from a conservative bent of dress I was overpowered by his lavish , bold and bright colours. And those white shoes!! Looking good! You have to have the right kind of personality to wear that kind of clothing and Danny was THE MAN.

I hope I'm not sounding too superficial about my dear friend with tales of clothes and charm. Danny was so much more than that.

He kept in contact with his former classmates from Del La Salle University in the Philippines and often exchanged information on the development in computer sciences. In 1994 he was invited to present a paper at his university entitled: The Beauty of the Internet: It's Charm and Dilemma. I know this paper oh so well because I edited it, having had very little experience in computer terminology, I remember trying to eliminate the word "Cyberspace" and asked Danny if it was a real word- Danny looked at me in disbelief and said "Art, just leave it in!" Needless to say that it did mean something. Danny's paper was well received in his home country and can still be read online today.

Danny and a few of his classmates organized a program to improve computer literacy by providing used computers to elementary schools throughout the Philippines. Danny was a passionate man when it came to education.

Danny I'm going to speak about another side of your humanity. The side that the ones who love you accept as part of the whole package. To those who didn't know you well, at times you could come across as gruff, blunt, opinionated (sounds a lot like myself). What about your stubborn nature? You were a champion in that division. Once your mind was set you would never think about changing it. And boy were you intolerant of anyone who YOU perceived by the wrong. Sometimes that's a good thing, sometimes it's not.

I thank God that you did not become a Court judge! And Danny, you could fly off in a rage. It seemed impossible for you to quell your emotions at times but I know it was a way of expressing your honesty, straight and in your face. I was a recipient of these outbreaks on numerous occasions as Danny's family well know. At times it was hurtful, but hurt passes and love remains. There was nothing more important to Danny than his wife, his daughter, his son, his granddaughter and his son-in-law. Danny's family made him oh so proud, maybe Davi and Janina didn't hear this as often as I did but your father always told me how much he loved you both and how proud he was of your education, how proud of the success you have achieved in your chosen careers. And here is one refrain that I will never forget for he repeated it to me so often "Art, I love my wife!"

Danny followed Virginia to Vienna after she was chosen as part of the first group of nurses to work within the Austrian medical system back in the early 1970s. He gave up a good job as a project engineer with a Japanese company so that he could be with her in Austria. Although he pined for his homeland he never regretted his decision to come and be with Virginia in Vienna. Here they raised their family and here his life ended. I know he always wanted to return to his home country and now he will - to rest in peace.

So how do I say goodbye to my best friend? I can hear him now saying "Art, this better be good!" Danny I will miss you for all the years we shared together, your love, your loyalty, your warmth, your generosity to me and others. I will miss your outlandishness, be it in your humour or in your clothes. I will miss your charm, your passion, your gruffness, your outbursts of rage, your soft humility. I will miss your keen interest in science and I will miss your honesty. But the one thing I will miss most is how you expressed belief in your faith. I might no longer be a believer but I believed in your belief. It was strong and true and so were you. So my dear friend, farewell and never forget that I always did and always will love you."

More memories were collected in a Memorial Book.  An excerpt from this collection may be found here.