In Memory of Janusz Kindler

It is with great sadness that IIASA marks the dealth of Janusz Kindler, who led the water Project at IIASA and later chaired the Resources and Environment Reserach Area. He was at IIASA from 1976-1983. 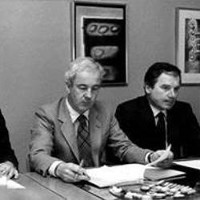 Janusz Kindler worked primarily on integrated water management issues at IIASA, especially demand management and river basin planning. He was a member of the Water Resources Committee of the Polish Academy of Sciences, and friend to many IIASA colleagues. They share their memories below.

A Remembrance of Janusz Kindler

I met Janusz at Schloss Laxenburg in Austria in 1978, when I was working for the US National Academy of Sciences to organize the first UN World Climate Conference, which would take place in February of 1979. IIASA would host the preparatory meeting of speakers and authors for the conference in the Schloss and also contributed the lead paper on climate and energy. IIASA’s Resources and Environment (REN) group was just forming at that time under the leadership of the Siberian hydrodynamicist, Oleg Vasiliev, and Janusz, a water resources engineer from Warsaw Polytechnic. They were quartered amidst much dust and plastic sheeting in the Schloss’ Silberkammer and Kitchen Wing, then still under renovation.

The paper on “Climate Variability and the Design and Operation of Water Resources Systems” for the World Climate Conference was co-authored by American John Schaake, from the National Weather Service, and Zdzislaw Kaczmarek, a friend and colleague of Janusz from the Institute of Meteorology and Water Management in Warsaw. Zdzislaw would become the chief of the Polish weather service.

I returned to IIASA as a staff member in June of 1979 to build a climate task and spent most of the next three years in residence, with Oleg first as my boss and then Janusz. By 1980, most of the Silberkammer and Kitchen Wing were palatially renovated although reached through the long chilly Kaisergang, a passageway with many cubicles, often empty. The passage gave our REN territory a feeling of independence, and Oleg and Janusz maintained a warm, federated, un-hierarchical atmosphere. At the far end of the Kitchen Wing an office contained the switch board and telex, which in this era of the Cold War added some mystery.

Janusz’ own work when I first met him focused on the then-surprising topic of water demand, sometimes in cooperation with Cliff Russell and Blair Bower from Resources for the Future in Washington DC. In this era, most everyone still assumed high rates of growth in demand for energy, materials, land, and water. Janusz was years ahead of the crowd in focusing on demand-side management, and in most developed countries since 1980 water demand has in fact grown very little, thanks to a mix of technical and behavioral approaches.

When Oleg could not return to IIASA from a visit to Moscow in the late spring of 1980 owing to political difficulties, Janusz gracefully assumed leadership of REN. Grace is a word one associates with Janusz, and he handled this awkward transition extraordinarily well.

While water was the life of REN, the rest of us felt very much embraced. These include Andy Anderson (USA, resource economics), Eli Runca (Italy, air quality), Pekka Kauppi (forests), and me. With Janusz’ blessing I started (with Ingolf Stahl, John Lathrop, and Jennifer Robinson) a “carbon and climate gaming group” that built the first multi-player games about greenhouse gas emissions and responses. REN’s general manager, Finn Raimo Ruotto, attentively made sure Janusz provided generously for REN but did not exceed limits.

Janusz’ soft-spoken, somewhat modal style corresponded with wide knowledge. Janusz knew in detail not only about the Vistula but also about the Tigris and Euphrates (where he had worked for five years) and many other regions. Later he would become expert on Lake Chad. Janusz loved jazz, notably John Coltrane’s My Favorite Things (1961), and the timbre of the saxophone and piano in that piece perfectly capture Janusz’ own voice and moods.

Many women who worked at IIASA seemed to have special fondness for Janusz, based on the frequency one found them near his office or chatting by the coffee machine. These included a competent and high-spirited cadre within REN, including Sofia Boitsova, Marilyn Brandl, Liz Jaklitsch, Anna John, Pam Hottenstein, and Judy Pakes, as well as Vivien Schimmel and others whose offices were distant. Janusz was, however, busy growing his own family with great affection.

While collaboration and cooperation are words I associate with Janusz, I recall his pride in the outcome of the World Cup in 1982 when the Polish national football team eliminated the USSR and then defeated France for 3rd place.

Janusz and I remained in occasional contact in subsequent years, crossing paths in Washington DC sometimes during his World Bank years. In the 1990s I had the pleasure of introducing Janusz and Joanna to the island of Martha’s Vineyard, where they visited with me and then stayed in a cottage in the wonderful gingerbread Campground of Oak Bluffs. In 2017 we shared sadness over the passing of Oleg Vasiliev.

I am grateful to IIASA for having brought us together, and to Janusz as a benevolent and beneficent boss and convivial friend.

Contribution to Remembrances of Janusz Kindler

It would, I think, have been the autumn of 1976 when I first met Janusz, at a workshop at the International Institute for Applied Systems Analysis (IIASA) in Laxenburg, near Vienna. Subsequently, from 1977 to 1982, I worked as a colleague of Janusz under the Resources & Environment (REN) research programme of IIASA. His office was opposite mine in Schloss Laxenburg’s Park Wing.

As I look now at the photograph of Janusz (sitting on the rock, in an alpine setting) I see the Janusz of 40 years ago. Among the warm memories I have of him, one is prominent. Like Janusz, my wife (Penny) and I lived in Baden bei Wien. We, or perhaps it was just myself, were invited round to Janusz’s apartment for coffee, in the Marchetstrasse, on the corner with (what google maps tells me is) Pepi Steiger-Platz. The apartment was on the second or third floor. It was summer. A jar of jam or marmalade stood open on the table. And a trail of ants led from the jar along the table and (somehow) up the wall to the window sill and disappeared down the outside wall. I was impressed and remarked upon this. “Oh yes”, said Janusz, “they’re very friendly around here. They like my jam”, and carried calmly on. (As for me, I would have put a stop to them — the cheek of those ants, inviting themselves in!)

I sense those who knew Janusz so very much better than I did would say this state of being “at ease with nature” was of his essence.

Joanna, Penny and I must surely have enjoyed your’s and Janusz’s company on some of the IIASA ski trips (vintage circa 1978-81). We hope my noting them here will evoke fond memories of what (for us) were very special times.

I was sad to learn that Janusz Kindler passed away this past December. He was such a gentleman, such a kind and compassionate colleague, that one might not immediately recognize the very astute and observant scientific mind he had. That combination of gracious courtesy and insightful observation and analysis made him welcome in any scientific meeting or project. He will be sorely missed.

The photograph below is from the last time I was so lucky as to work with him. Piotr Magnuszewski was running a social simulation on river management at a regional water management agency in Krakow in 2008. It was an interesting and innovative departure from the drone of scientific conferences, and Janusz jumped right in with enthusiasm that was tempered by the gravitas his decades of experience could contribute. As a young scientist, I deeply appreciated that respectful and gracious way he received me and only wish I could have returned more to him to complete the circle. 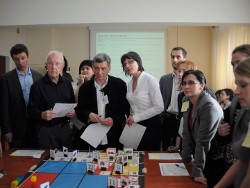