In Memory of Peter Popper

Former IIASA Director Leen Hordijk spoke at the memorial for the late Peter Popper, former IIASA librarian. His words on 14 October 2017 in the United Kingdom appear below. 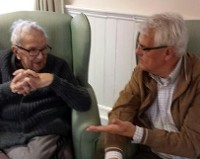 Peter Popper before his 93rd birthday with Leen Hoordijk

In the fall of last year we came to see Peter in the nursing home where he lived in the last stage of his long life.  It was the last time we met each other, and the three of us knew that. It was a good and warm visit. We talked about our joint past in Austria. We share so many memories!

We met Myrtle and Peter in the beginning of 1984 when we moved to Baden bei Wien with our three sons. I started working at the  International Institute of Applied Systems Analysis (IIASA) in the nearby town of Laxenburg. The Poppers lived close by. Myrtle introduced Eljoke to the Baden Coffee Club, where non-Austrian and Austrian women came together on a regular basis. It was the start of a warm friendship.  During visits to the Popper home our sons loved to play with the dog and started to appreciate Myrtle’s beautiful English, used as they were to American English. Myrtle and Eljoke went together to the Commissary, a tax free shopping centre in the northern part of Vienna. The car was always loaded to the roof when they returned. It was fun and there was a lot of humour and laughter (between the two of them). Myrtle acted at Vienna's International Theatre and at the English Theatre in its early days. She used the stage name Miriam Jordan. Up to her death she remained to have her beautiful voice and perfect diction.

Peter Popper was head of the IIASA Library from 1973 to 1985, after which he and Myrtle moved to Luxembourg. During this IIASA period he was responsible, together with his deputy, Eduard Löser, for developing the Library as a unique research tool that was heavily relied upon by more than a hundred and fifty scientists who visited or worked at IIASA during this period. IIASA had started in 1972 at the initiative of the leaders of the USA and the Soviet Union. It was indeed a unique place to work at in the Cold War. Peter has built the library into a dynamic clearing house for information, rather than being a passive repository of knowledge. This was not a totally new concept, and had been put into practice by many forward-thinking librarians around the world. What was unique was the way the concept was put into practice at IIASA, through a fortunate combination of circumstances and exceptionally capable people.

The 1970s was when computers began to be used to generate key-word-in-context lists of titles as an index to library holdings. The need for subject classification practically disappeared with the inclusion of key chapter headings in so-called key-word-out-of-context listings. Peter worked closely with Jim Curry, an exceptionally talented programmer, who was able to create a robust and reliable online catalogue that was a marvel of its time. Peter's administrative genius was to harness his deputy's exceptionally thorough expertise in local documentation, and combine it with his own broad overview of science issues in general to create a service that was widely praised by scientists and considered one of the best in the world at the time.

As a librarian Peter started a Library Committee at IIASA with whom he consulted to decide which books to buy and which journal subscriptions to keep. Although I was the youngest project leader at IIASA at that time, and was involved in a new research field, Peter was very interested to bring the best books and journals about air pollution to IIASA. He was of great value to numerous IIASA scientists!

Peter and Myrtle left Austria in 1985, went to Luxembourg and later back to the UK. We always kept in contact by telephone and we visited each other quite a few times.

We have been very fortunate to have known the Poppers and remember them both with love and great fondness.

Leen and Eljoke Hordijk (with input from Aviott John, retired librarian of IIASA)

Peter Popper with Leen and Joan Hordijk in November 2016