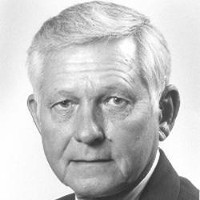 As leader of IIASA he successfully reoriented the Institute toward a more systems oriented research approach, one that focused on the practical application of science to ‘real-life’ issues. He will be fondly remembered by his colleagues at IIASA as an outstanding scholar, a visionary scientist, and a gifted leader.

excerpt from the Obituary Published in Houston Chronicle on February 24, 2012

Robert served in the U.S. Army during which time he attended Texas A&M, Oklahoma State and the University of Manchester (UK) and served in the Signal Corps. in France during WWII where he met his wife of 63 years.
Following the war he attended Rice University, obtaining an MA/PhD in Physics. In 1951 he joined General Electric in Niskayuna, NY as a Research Physicist in Metallurgy & Ceramics becoming Manager of Materials Science & Engineering. He holds numerous patents for his work during this period. He worked tirelessly to promote and further scientific research & development as Vice President R&D, Combustion Engineering (Stamford, CT), Vice Chairman, Technology and Executive Vice President, R&D, Gould Inc. (Rolling Meadows, Ill.). He was also the Founding President of the Center for Innovative Technology (Sterling VA), Adjunct Professor at M.I.T (Boston, MA) and Director of the International Institute for Applied Systems Analysis (Laxenberg, AU).