Jeanne Anderer was a respondent on the 'Energy, Climate, and Air' Panel at the YSSP 40th Anniversary Event. 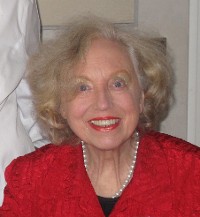 Jeanne Anderer is a graduate of St. John’s University, New York. She joined the IIASA Energy Systems Program in 1978, as technical writer and editor of Energy in a Finite World, A Global System Analysis, IIASA’s pioneering global and long-term study of energy systems from l980 to 2030 with Wolf Haefele, Program Leader. A companion summary volume subtitled Paths to a Sustainable Future was written by Jeanne Anderer, with Alan McDonald and Nebojsa Nakicenovic. Both volumes were published in English in l981 by Ballinger Publishing Company; translations and/or summaries of the study’s results have appeared in French, German, Japanese, Russian and Spanish.

Since then, she has provided technical writing and editorial services for numerous organizations, notably the International Atomic Energy Agency, Brookhaven National Laboratories, USA and the JFK School of Government at Harvard University. Her work has addressed issues ranging from nuclear safeguards and verification, nuclear non-proliferation, radiation safety, and sustainable development.