Miho Kamei is currently at the Institute for Global Environmental Strategies (IGES) in Japan and recently published on socioeconomic scenarios at the city scale for Tokyo. Below she describes the importance of this work and the impact of the YSSP. 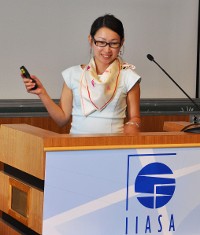 "The work in the publication describes the long-term future of cities, which includes a number of uncertainties. Cities throughout the world face diverse, complex social problems. These issues are often interlinked with other problems, or they may have trade-offs with specific solutions. Long-term socioeconomic pathways are a means to subjectively analyze these overlapping and interrelated social issues in order to achieve integrated, sustainable solutions and policy goals.

The climate research community has recently developed the Shared Socioeconomic Pathways (SSPs) for global analysis (Moss et al., 2010; van Vuuren et al., 2014; O’Neill et al., 2014; Kriegler et al., 2014). However, these are defined and developed at an aggregate level for broad regions at the global scale, and thus need to be translated for applications at a city scale. A significant part of my work was the transformation of these global aggregate SSP developments to the city scale. I conducted expert interviews to collect detailed information and confirm the reliability of theoretically developed scenarios considering real developments for the city of Tokyo. At the city scale, urban form indicators, among other urban amenity factors, have been developed to describe the urban context and influential elements such as commuting distance and building type. These processes can also be included as part of a local multilevel governance system for developing long-term master plans involving a diverse set of stakeholders. This discussion and analysis, related to development of socioeconomic pathways, may help in sharing visions and organizing valuable networks for realizing a sustainable society.

The initial motivation for my research during my YSSP experience was developing such SSPs for cities. However, as the YSSP is limited to three months, I changed the objectives of my research to investigate factors influencing the relationship between urban form and energy use. First, I looked at the transition process and identified key drivers, which may have influenced changes in observed historical patterns of urban forms. In the next phase of my YSSP research, I applied basic correlation analysis to explore the relationship between income, energy use, and population density for four large nations/regions - the USA, India, China, and the EU27. My research was guided by supervisors within the IIASA Energy Program. I was excited by what I could already learn by examining patterns in time series data at an aggregate level. My work at this time also helped me gain insight of how the combination of qualitative and quantitative analysis can reveal significant scientific realities of social phenomena.

My Ph.D. study is also based on carrying out both qualitative and quantitative analysis, and this paper is formerly a part of the qualitative analysis. I successively analyzed the building of a lifetime trend, future building stock, and carbon emissions by applying some mathematical models based on the alternative socioeconomic pathway for the city scale.

I would like to express great appreciation to IIASA and the energy team for providing me with a solid foundation to build my thesis research on and the many opportunities for interdisciplinary discussions with distinguished scientists during my stay there. I also learned the importance of collaborative team work, which can expand ideas and creativity. Being connected with fellow YSSPers encourages me to continuously promote research and reminds me of the great research family at IIASA."