The following anecdotes were written by Ruth Steiner from her time at IIASA as Head of the Personnel Department from 1973–1983. 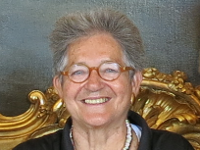 "A few anecdotes of experiences I have had during my ten years at IIASA. It could be that I sometimes saw these incidents differently than others have. If I hurt anyone's feelings please forgive me but I meant it well. Happy 1983."

In order to employ staff from the Laxenburg area, we decided at the end of April 1973 to post signs throughout the Laxenburg district announcing that interviews would take place on a certain day at a certain time.  When I arrived in Laxenburg (IIASA was still in Baden then), people were queuing from the Rathaus in a line that led down the Schlossplatz to the corner where the hairdresser now is.  Julyan Watts and I interviewed from 17:00 until 1:30 in the morning.  At about 11:00 some bottles of wine were bought to keep our strength up.  I cannot remember the last few hours very well but most of the manual support staff were hired as a result of that interviewing.

Before George Danzig arrived, Howard Raiffa informed me that he was a very famous scientist and that I should be as cooperative as possible.  A few days later I received a call from George with the following request: "In front of my room is a truck that is very long.  I cannot imagine that it is advantageous to have such a length.  Could you please find out what is in the truck, where it came from, what route it took, and how it got around the corners."  Although slightly taken aback by this request I am paid to be tolerant.  I will never forget the truck driver's face when I asked him the above questions, the answers to which were: furniture from Salzburg; over the autobahn; by backing up several times; and two days.  I passed the information back to George, thinking that would be the end or it.  Sometime later George's research assistant called and informed me that the company would have saved 40% of their costs if they had used four smaller trucks instead.  I phoned the company with this information.  They thought I was totally out of my mind.

George Danzig always drank his soup out of a beer mug.  When I asked him why one day he wrote out a long mathematical formula which proved that there was less heat wasted using a beer mug compared to a soup bowl.

One Sunday afternoon Prof. M decided to work on the Director's terrace (or, Empress Elizabeth's breakfast room).  The nightwatchman did not see him and locked the door.  There was no telephone in there then.  M spent a long cold night.

After Mr. Nabend we had a very fierce looking watchman, who also had a second occupation.  He was a fire swallower and had a sex show in the Prater.  The only disadvantage of having this colorful man as an IIASA night watchman was that he was so scared of the dark at night that he would lock himself in his room if he heard strange noises.  Sometimes he hid behind corners if he heard footsteps.  This reaction scared other people even more and resulted in Wes Faell nearly calling the police one night.

President Kirschlaeger was expected to arrive to visit IIASA.  Fritz had rolled out a red carpet from the door of the Schloss to where the car was planned to stop.  Plants had been set out and each leaf had been polished in beer to make them shine.  A few minutes before the President was due to arrive "Mutea" (George Lindelof's first dog) also felt all the excitement.  She walked very sedately down the red carpet and did her best in the middle.  I had never seen Fritz so close to a heart attack before, nor Haefele laugh so loud.

In the summer the courtyard of the Blauerhof is used as an open air theatre.  Haefele was working in his office one weekend during the first year a play took place.  Suddenly, the canons went off and gun fire started to depict the big battle of the play.  Haefele stormed out of his office to a window overlooking the hof, threw it open and demanded silence.  It did not take long before he realized that the hof was full of people who thought he was part of the show.

When Andrei Bykov arrived we were all amazed at his resemblance to James Bond.  To make the effect complete I switched his personnel numbers with him.  That gave me the number 012 and Andrei was 007.

One of the first people I was asked to find was a driver for the Director, someone who could also entertain the Director to and from work.  I interviewed George Lindelof while he was working as a bar keeper at the International Students Club.  He never stopped talking, from the beginning to the end of the interview.  The only words I did manage to say were "You're hired."

When introducing George to the Director Howard Raiffa, George took Raiffa's hand and said "Oh! so you are the big cheese around here."

Cardinal Koenig, the Archbishop of Vienna made a surprise visit to IIASA.  He walked into the library to look around but only George was there.  George went up to him and introduced himself, "Hi, I'm George."  "Hi," came the reply "I'm Franz Koenig, Archbishop of Vienna."

A participant at one of the first IIASA conferences was taken ill with a bladder problem.  The doctor could not speak English and the participant could not speak German; there was only me to translate.  To avoid making an already delicate situation more painful there was only one thing to do.  I sat in the bathroom of the hotel room yelling out what the doctor and the patient were saying to each other.  It was certainly the most unusual translation I ever had to do.

A visiting scientist who had just arrived decided to go jogging in the park.  He had no jogging shorts with him but as it was dark decided to go in his underpants and ran out into the Park.  He got lost.  Finally, he found his way to the front of the Lodge parking gate, where he discovered he had no key!  In the meantime the police had been watching him and decided to take him to their office for a chat.  He explained that he was from IIASA which did not seem to surprise the police.  They called me and I went to the rescue with a blanket.

Just like the staff the day care center has children from all over the world.  One day the mothers of Iwan and Johnny came to my office very upset.  Their children had been fighting and both looked a bit battered.  I was called in to referee and a fierceful discussion took place on who had started the fight, the Soviet or the US child.  What was the quarrel about?  Who could occupy the playhouse first.

One of the first telexes IIASA ever received was from Japan in preparation of a visit there by Howard Raiffa.  It read "will you bring your wife with you or would you like hospitality?"

from IIASA with us!