Arthur Munkenbeck, who has been working for the IIASA Library since 1974, remembers IIASA's Softball Team, the “Screaming Eagles”, later to be renamed the “Famous Specific Grips” 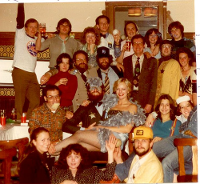 Once upon a time there was a magic place were all sorts of wonderful things happened, especially on Friday afternoons. It was a place that was isolated from the stress and worries of the rest of the week. It was an island of tranquility and relaxation. And beer.

Actually it was a weedy, bumpy, makeshift paying field with awkward boundaries and a lot of nasty thorn bushes located just behind the IIASA tennis courts. And it was the official home ground of IIASA’s softball team, world renowned (at least in Laxenburg) as the “Screaming Eagles”, later to be renamed the “Famous Specific Grips”. How did it come to pass that a lazy North American ball game, derided by the British as a degenerate form of “rounders” and unknown anywhere else on the planet, become a focal point of international socializing and merrymaking?

Sometime around 1977-78, Jeanette (Lindsey) Aspden, editor of publications, decided, with the help of Donaldo Colosio, to organize a group of people who MIGHT have some idea as how the game was played. In spite of IIASA’s reputation, one really didn’t need to be a systems analysist to play this game. All that was required was a bat, a softball, a glove or mitt if you wanted to show off, and a lot of beer. Jeanette had the bat and ball so she automatically became Captain and leader. The rest of us concentrated on the beer.

The list of participants (because it was hard to categorize them as players) reads like a history of IIASA. Jim Kulp, Jim Curry (both Computer Services), Norio Baba (ARP), Kenneth Boulding (visitor to SDS), Bradley Hitchings (scientific writer), Danny Caacbay (ICT) etc. This didn’t make us any better playing “real” games such as against the Japanese Embassy (they killed us) or the US Marines (we will get back to them) but we became a practiced group in having fun.

By 1980 we had our first “Commissioner” of softball, Jesse Ausubel (leader of IIASA’s Climate Task within the Resources and Environment Program from 1979 to 1981 and currently Director of the Program for the Human Environment at Rockefeller University, New York) .Through his guidance and the support of STAC, we were able to purchase gloves and bats (I brought them back from the US in my hand luggage!) so that we could pretend that we actually knew what we were doing on the field . But we weren’t fooling anybody. The words “international rules” were coined to cover our flaws and they were numerous to say the least.  Running the bases backwards, throwing the ball at the opposition for no reason at all , taking 10 minutes  trying to make contact with the ball, falling asleep in the outfield grass while the opposing team scores 20 runs. Hey , it’s only a game!

Jesse Ausubel recently wrote me when I asked him for his memories: “We supported gender parity before it became a legal requirement. Occasionally Austrians walking through Laxenburg park would come across us and stare as if we were staining the memory of Maria Theresa.” He also added: “It was very helpful during 1979-1981 that the Laxenburg Stüberl, including outside, was opened and popular after the Friday afternoon games which began at 3:30. As one can surmise, the emphasis was on having fun.

Oh, and we finally did beat the US Marines. Miracles can happen. I certainly so miss those IIASA softball days. Anybody up for a game this summer?

from IIASA with us