Under the framework of the YSSP Fund, the Jyoti and Kirit Parikh YSSP Fellowship offers an advanced graduate student from India or a developing country the opportunity to participate in the Young Scientists Summer Program. 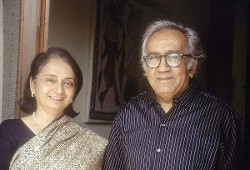 Prof. Jyoti Parikh and Prof. Kirit Parikh, alumni and long-time collaborators of IIASA, made a generous gift to the YSSP Fund in 2018 with the hope of providing much needed support to talented researchers from India and other developing countries to participate in the annual Young Scientists Summer Program (YSSP) at IIASA.

Honoring the funders' wish, IIASA has established a named YSSP fellowship for five years, beginning in 2019.

Our years at IIASA (1976-78, 1980-86) constituted one of the most rewarding phases of our lives. We paid tribute to IIASA by setting up two institutes in India along the lines of IIASA viz. Indira Gandhi Institute of Development Research (IGIDR), Mumbai, which was funded by India's central bank, Reserve Bank of India, and Integrated Research and Action for Development (IRADe), New Delhi. Both these institutes promote multidisciplinary research providing support for decision making. We hope that with this YSSP fellowship at IIASA, young minds will get wide exposure to systems analysis and carry new ideas to their respective countries to make a difference.

About our funders and their collaboration with IIASA

Professors Jyoti and Kirit Parikh have been longstanding collaborators and supporters of IIASA. 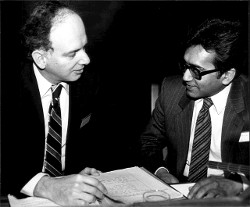 During his time at our institute, Prof. Kirit Parikh was the Program Leader of the Food and Agriculture Program (1976-1986), under which general equilibrium models of some 20 countries were linked to address policies to reduce hunger in the world. After leaving IIASA, Prof. Parikh served on the IIASA Council and remained a close collaborator on numerous research projects. He was a member of economic advisory councils of five Prime Ministers of India (1988-2004) and Member of India’s Planning Commission (2004-2009). He is widely recognised as the architect of India’s Integrated Energy Policy and Low Carbon Strategy for Inclusive Growth. Prof. Kirit Parikh is Emeritus Professor and Founder Director of the Indira Gandhi Institute of Development Research.

Prof. Jyoti Parikh worked in the IIASA Energy Program, and in the Resources and Environment division (1976 - 1986). After leaving IIASA, she served as the Energy and Environmental Consultant to the World Bank, the U.S. Department of Energy, EEC, Brussels, UNIDO, FAO, UNU, UNDP and UNESCO. She served as a member of the Scientific and Technical Advisory Panel (STAP) of the Global Environmental Facility (1996-1999), and was a member of the Prime Minister’s Advisory Council on Climate Change (2008-2014). Her research interests span many areas ranging from policy analysis of energy and environment, climate change policies, modelling, technology assessment, power sector, natural resource management, agriculture, health, poverty and gender. Prof. Jyoti Parikh currently serves as advisor to the Global Commission on Adaptation and is the Executive Director of the  Integrated Research and Action for Development (IRADe).

Professors Jyoti and Kirit Parikh are co-authors of the Global Energy Assessment. Its findings were presented at the fourth Clean Energy Ministerial (CEM4). The event was chaired by Prof. Kirit Parikh and Prof. Jyoti Parikh was one of the speakers. For videos and presentations from this event, visit this page.

The Parikhs have been active researchers on the issues of climate change since 1990. Both of them have actively participated in various IPCC reports as coordinating lead authors, lead authors and reviewing editors and have shared the Nobel Prize awarded to IPCC authors in 2007.

Here's what IIASA alumnus, Robert Anderson, wrote about them:

“By founding the Indira Gandhi Institute of Development Research after his return to India, Kirit Parikh took the IIASA model to new heights. The institute facilities were magnificent, and used skillfully by Kirit and Jyoti to substantially improve important dimensions of India's development policies. They played a key behind-the-scenes role in helping to instill in India's politicians the confidence they needed to go ahead with the liberalizing reforms undertaken in 1993, which set India on a much faster path to reduction of poverty.”

Integrated Research and Action for Development

More about the YSSP