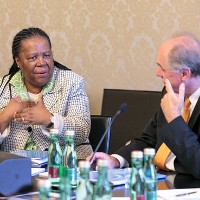 On 21 June the South African Minster for Science and Technology, H E Minister Naledi Pandor, visited the Institute to discuss IIASA's ongoing collaborations with South Africa. In addition to strengthening cooperation between IIASA and South African institutions through activities covered under an MoU signed five days earlier with the NRF, the Minister pledged to serve as a liaison to the broader African science and policy community.  She offered to bring NRF support to the participation in IIASA programs of promising young scholars throughout Africa, and to serve as a liaison to the African Union program in Science and Technology. The Minister also emphasized the importance of linking scientific results to appropriate decision making frameworks, so that the analysis can inform policy more effectively. 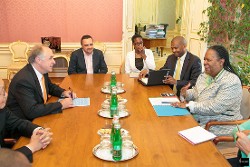 The delegation listened to presentations from

In addition, the delegation toured the institute and surrounding areas; and discussed how to enhance the partnership between IIASA and South Africa; including a second generation of cooperation between South Africa (DST/NRF) on systems analysis capacity development, building on the successful Southern African Young Scientists Summer Program, which concluded its third session in 2015. 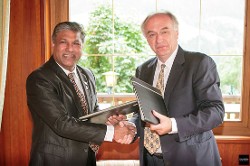 On 16 June NRF’s Deputy Chief Executive Officer for Research and Innovation Support and Advancement (RISA), Dr Dorsamy (Gansen) Pillay who is also IIASA Council Member for South Africa, and IIASA’s Director General and CEO, Prof Dr Pavel Kabat signed a MoU between IIASA and the NRF. This agreement will strengthen joint activities between the two organizations to develop capacity in systems analysis in South Africa and facilitate greater involvement of South African researchers in IIASA.

Specific activities will include:

Since South Africa’s membership of IIASA began in 2007, a range of research collaborations and capacity building activities have been developed by IIASA and over twenty South African research partners. The most notable activity is the Southern African Young Scientists Summer Program that has developed system analytical research skills among over 80 doctoral students from 30 countries including 35 students from South Africa.

Joint research studies have explored how South Africa can make the transition to a low-carbon economy; smart ways to increase crop yields in South Africa; and the impact of different education policies on South Africa’s future population. These activities are complemented by scientific exchange with over 120 researchers either visiting South Africa from IIASA or visiting IIASA from South Africa.