A growing body of research shows how fish populations evolve in response to fishing, and how fisheries must adapt in order to maintain sustainable yields. 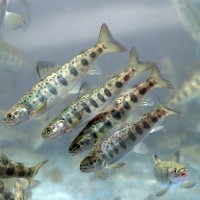 Two recent IIASA studies, highlighted last week in the journal Evolutionary Applications, add to the expanding understanding of the influence of fishing on the evolution of fish populations. Both studies were featured in a list of five “research highlights” by journal editor Britt Koskella. She wrote, “Overall, the application of evolutionary and ecological theory to fisheries management over the last few decades has proven invaluable.”

In one of the highlighted studies, led by Lise Marty, a 2009 participant in IIASA’s Young Scientists Summer Program (YSSP), she and colleagues found that exploitation of fish populations can lead to the evolution of slower growth, early maturation, and greater investment in reproduction. The study further cautioned that populations may not recover from these changes, even if fishing is stopped completely. Moreover, fishing can impoverish, essentially irreversibly, a population’s genetic diversity: this curtails its evolutionary potential, and thus its capacity to adapt to future environmental changes.

The second study, led by IIASA postdoctoral researcher Pietro Landi, a participant in the 2012-13 Southern African Young Scientists Summer Program (SA-YSSP), showed that common fishing practices may even cause fish populations to evolve into separate varieties, through a process known as evolutionary branching. While the study is theoretical at this point, Landi says it shows an important potential impact that should be considered in fisheries management.

Since the 1990’s, IIASA’s Evolution and Ecology Program (EEP) Director Ulf Dieckmann and his colleagues at IIASA and around the world have been at the forefront of research showing how fishing practices can exert selective pressures on fish populations, driving them to evolve in response to these outside pressures within a few years or decades.

These findings are important for understanding how fish populations react to pressures from fishing. The research is also now finding its way into practice, for example in the development of Evolutionary Impact Assessments (EvoIAs), a collection of tools that allow fisheries managers to assess the impact of fishing regimes on evolution.

The international team of collaborators working with IIASA’s EEP on fisheries-induced evolution now includes many alumni of IIASA’s YSSP and SA-YSSP.