Simon Levin, an IIASA distinguished visiting fellow and former council chair, has received the 2015 US National Medal of Science. 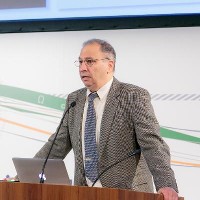 Simon Levin has been awarded the 2015 US National Medal of Science for his work on ecological complexity. The medal is the highest award for scientific achievement in the USA. Levin will be honored at a ceremony at the White House early this year.

Simon Levin, a professor of biology at Princeton University in the USA, is one of the leading thinkers in systems analysis. His research interests are in understanding how macroscopic patterns and processes are maintained at the level of ecosystems and the biosphere, in terms of ecological and evolutionary mechanisms that operate primarily at the level of organisms; in infectious diseases; in ecological economics; and at the interface between basic and applied ecology.

Levin was chair of the institute’s governing Council from 2003-2009, vice chair from 2009-2013, and chair of the US Committee for IIASA throughout this time. In 2014 he became an IIASA distinguished visiting fellow. He also collaborates with IIASA researchers, particularly Ulf Dieckmann, in the field of modeling ecological and evolutionary dynamics.