The transformative power of cities

A new report from the German Advisory Council on Global Change examines the trend of urbanization and its implications for sustainability. 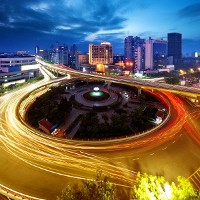 More than 2 to 3 billion people worldwide will move from to the cities within the next few decades, doubling the population of the world's slums. It will be the biggest migration of our time, according to a new report Humanity on the move – Unlocking the transformative power of cities, published last week by the German Advisory Council on Global Change (WBGU). The power of this urbanization surge will be the key driver of global change in the 21st century.

For the report, IIASA researcher Sebastian Busch analyzed the infrastructure and metabolic needs and patterns of cities globally. IIASA Deputy Director General Nebojsa Nakicenovic serves on the WBGU and also worked on the new report.

“The infrastructure is like the hardware of cities; it is strongly interwoven with the social dimension, which we see as a city’s software,” says Busch. The researchers argue that this social dimension is of utmost importance to enable the sustainable transformation of cities, as well as an indicator for how sustainable cities are becoming.

In order to help cities spur changes towards sustainability, the WBGU report provides a new ‘normative compass’ to provide orientation for societal action that could help change urban development. It describes the constraints within which cities’ development pathways towards a people-oriented form of urbanization should be realized, and which, if breached, would put sustainable development at risk.

"Urban growth is so immense that it must urgently be channeled in new directions," said WBGU Co-Chair Dirk Messner, Director of the German Development Institute. If more and more new settlements are built with cement and steel in the cities of developing countries and emerging economies, the energy-intensive production of this building material alone could release such huge quantities of greenhouse gases by 2050 that the world's emissions budget of the 1.5°C target would already be virtually exhausted. Yet there are alternatives, such as building with wood or other natural materials. "Without decisive political action and international cooperation, humanity's natural life-support systems would be jeopardized by the demand for resources and the CO2 emissions of urban construction," said Messner.

The report presents a number of recommendations for urban transformation, focusing on the areas of climate and resources, people oriented cities, cities in international politics, and the need for future research. For more information visit the WBGU website.

Protecting the environment by fighting poverty