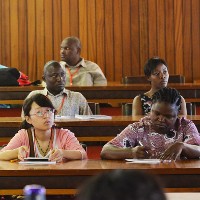 South African Minister of Science and Technology Naledi Pandor officially launched the Southern African Systems Analysis Centre (SASAC) on 22 May 2016 at an event hosted by the University of the Western Cape. During the event, the minister highlighted the need to realize South Africa’s grand challenges related to investment in biological sciences for public health and food security; better understanding and mitigating the impact of global change; achieving energy security; optimally exploiting the potential of space science and technology; and using science and technology to fight poverty and exclusion in South African society.

SASAC, co-hosted in South Africa by the Universities of the Western Cape, Limpopo, Witwatersrand and Stellenbosch, provides an opportunity for young, emerging doctoral candidates to advance their research under the supervision of senior IIASA and South African researchers, and at the same time contribute to the development of a globally competitive science system. The SASAC program takes cognizance of a wider framework of engagement, additional and multi-level systems analysis capacity interventions, and a comprehensive approach to policy related activities in South- and Southern Africa. For the 2016 intake, a group of 19 students have competitively been selected to participate in the SASAC program. Supervisors will be expected to spend up to 10 days at the beginning of the program on-site with the students, and together participate in an intensive, high level systems analysis capacity development intervention.

In a video message, IIASA Director General and CEO Professor Dr. Pavel Kabat congratulated South Africa on this landmark achievement and again committed IIASA’s support. South Africa has been a member of IIASA since 2007. Since then the country has worked closely with IIASA, particularly in the area of education and capacity building: for three years, South Africa hosted and co-organized the South African Young Scientists Summer Program (SA-YSSP). The new center builds on the success of that program, funding a group of 30 South African PhD students complete their studies with a supervisor from South Africa experienced in systems analysis and preferably with a co-supervisor associated with IIASA.

“For South Africa to reach the National Development Plan target of training 6,000 PhDs a year, it is necessary to build a cohort of system thinkers who will be able to contribute to attaining this target through scientific interdisciplinary research and capacity development. The SASAC students are part of my agenda to achieve this goal,” Pandor said. The minister also highlighted the importance of regional and international collaboration and partnership for South Africa to become a world class producer of knowledge and innovation. Considering the importance of international partnership in science and technology, “no PhD student should graduate without a level of international exposure, in the future.”

In closing, Aldo Stroebel, the executive director for international relations and cooperation at the NRF, emphasized NRF’s African agenda which has a strong focus on Africa capacity development. He provided examples of how initiatives such as the Science Granting Councils Initiative (SGCI) is supporting the ability of science granting councils in Africa to generate knowledge and evidence-based policies that will contribute to economic and social development in Africa.