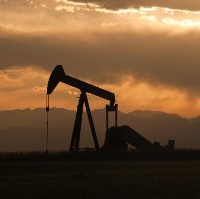 Ambitious policies to reduce energy imports would have little impact on climate change, and these energy independence policies could be achieved much more cheaply than the policies needed to limit global warming to 2°C, according to a new study published in the journal Nature Energy. The 2°C target was agreed in 2010 and re-affirmed at the Paris climate talks in December.

“We know that if we were to radically reduce greenhouse gas emissions, fossil fuel imports would fall. But we found that the opposite isn't true: restricting energy imports would have a very small impact on emissions,” says Jewell.

The study used five different global energy-economy models to examine eight long-term scenarios for policies focused either on reducing the emissions that cause climate change or on cutting oil, gas, and coal imports. It shows that restricting fuel imports would lower 21st century emissions by only 2 to 15% of baseline, which corresponds to future warming of roughly 3.5°C to 4°C over pre-industrial levels by the end of the century. In contrast, policies focused on climate change mitigation would need to achieve a 70% reduction in emissions in order to limit global warming to no more than 2°C by 2100.

This is because climate change mitigation requires a much more fundamental change in the energy system. IIASA researcher David McCollum, one of the coauthors, says that the reason for this is that “climate policies would stimulate domestic renewables and energy efficiency much more than policies focused on reducing energy imports.”

The study also shows that reducing energy imports would cost between 3 and 20 times less than stabilizing climate change at 2°C by 2100. “To know which policies are likely to be pursued, we need a better understanding of their relative cost. If a government is interested in reducing energy imports, how much are they willing to pay to achieve that? Specifically are they willing to pay for expensive climate stabilization policies and have energy security as a 'co-benefit' or is it more attractive to separately pursue much cheaper measures for reducing imports?” says Jewell. 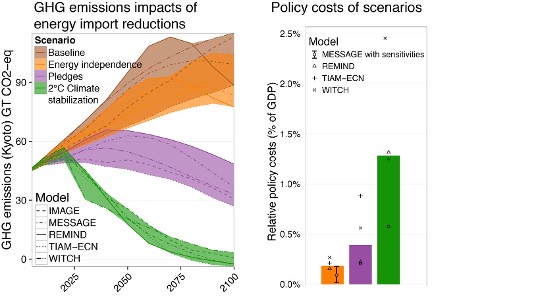 Aleh Cherp, a coauthor with Central European University in Budapest and the International Institute for Industrial Environmental Economics (IIIEE) at Lund University, believes that the answer to this question depends on how different the costs of the two objectives are. “If it costs about the same to stop climate change and reduce imports, both policies are more likely to be adopted together. If, as our study shows they are very different, it’s more likely that the much cheaper energy independence would be pursued separately. Of course, we need to analyze more real-life policies to check whether this hypothesis is true.”

The study also examined a less ambitious climate policy based on pledges similar to those submitted to the Paris climate meeting in December. It shows that the policy cost for these pledges is comparable to the policy cost for ambitious energy security policies, while limiting climate change to 2.5°C to 3.2°C by 2100. IIASA Energy Program Director Keywan Riahi says, “The main question is how to mobilize further investments which allows us to meet both objectives.”

What is energy security?