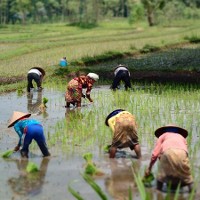 Women work in a rice paddy in Lombok, Indonesia © SarahTz via Flickr

Agriculture as a whole is responsible for about a third of human-caused greenhouse gas emissions, making the sector an important target for policymakers aiming to reduce emissions. At the same time, in order to feed the world’s growing population, food production will need to substantially increase in coming years.

The new study assesses emissions from cropland management for specific crops at a global scale, showing both the overall emissions as well as the amount of emissions per calorie, or emissions intensity.

IIASA researchers contributed spatially explicit layers on manure production and manure management systems to the study, in collaboration with researchers at the Commonwealth Scientific and Industrial Research Organization (CSIRO) in Australia.

“Although nitrogen from manure represents only about 22% of total nitrogen applied to croplands, in countries such as Denmark, Netherlands or Russia, it represents about 50% and hence needs to be properly accounted for. From the greenhouse gas mitigation perspective, it is interesting that 44% of manure application is concentrated in only  four countries: China, USA, India, and Brazil. Hence, focusing the mitigation on a few countries can bring substantial GHG emissions reduction. ” says IIASA researcher Petr Havlik, a study coauthor.

Read more: Press Release from the University of Minnesota, USA 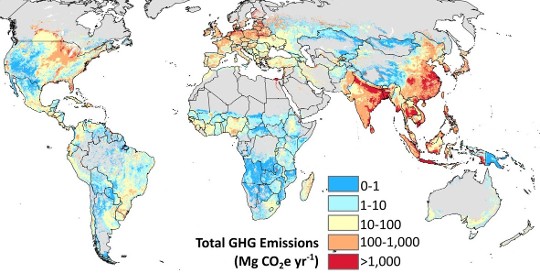