Changes in precipitation, which are linked to the warming of the Indian Ocean, are the main reason for recent changes in groundwater storage in India. 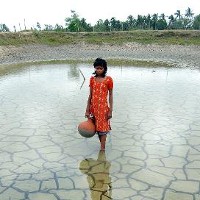 Changing rainfall is the key factor driving changes in groundwater storage in India, according to a new study led by the Indian Institute of Technology (IIT) Gandhinagar published in the journal Nature Geoscience. The study shows that changing monsoon patterns—which are tied to higher temperatures in the Indian Ocean—are an even greater driver of change in groundwater storage than the pumping of groundwater for agriculture.

Agriculture in India relies heavily on groundwater for irrigation, particularly in the dry northern regions where precipitation is scarce. Groundwater withdrawals in the country have increased over tenfold since the 1950’s, from 10-20 cubic kilometers per year in 1950, to 240-260 cubic kilometers per year in 2009. And satellite measurements have shown major declines in groundwater storage in some parts of the country, particularly in northern India.

“Groundwater plays a vital role in food and water security in India. Sustainable use of groundwater resources for irrigation is the key  for future food grain production,” says study leader Vimal Mishra, of the IIT Gandhinagar. “And with a fast-growing population, managing groundwater sustainably is going become even more important. The linkage between monsoon rainfall and groundwater can suggest ways to enhance groundwater recharge in India and especially in the regions where rainfall has been declining, such as the Indo-Gangetic Plain.”

Groundwater acts like a bank for water storage, receiving deposits from surface water and precipitation, and withdrawals as people pump out water for drinking, industry, and irrigating fields. If withdrawals add up to more than the deposits, eventually the accounts could run dry, which could have disastrous consequences. 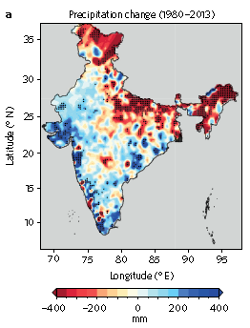 “This study adds another dimension to the existing water management framework. We need to consider not just the withdrawals, but also the deposits in the system,” says Yoshihide Wada, a study coauthor and the deputy director of the Water program at the International Institute for Applied Systems Analysis (IIASA) in Austria.

The issue of groundwater depletion has been a topic of much discussion in India, but most planning has focused on pumping, or the demand side, rather than the deposit side. By looking at water levels in wells around the country, the researchers could track groundwater replenishment following the monsoons.  They found that in fact, variability in the monsoons is the key factor driving the changing groundwater storage levels across the country, even as withdrawals increase.

In addition, the researchers found that the monsoon precipitation is correlated with Indian Ocean temperature, a finding which could potentially help to improve precipitation forecasts and aid in water resource planning.

“Weather is uncertain by nature, and the impacts of climate change are extremely difficult to predict at a regional level,” says Wada “But our research suggests that we must focus more attention on this side of the equation if we want to sustainably manage water resources for the future.”