Emissions of methane and ethane from oil production have been substantially higher than previously estimated, particularly before 2005. 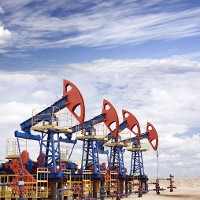 Global methane and ethane emissions from oil production from 1980 to 2012 were far higher than previous estimates show, according to a new study which for the first time takes into account different production management systems and geological conditions around the world.

Methane is a potent greenhouse gas, which scientists rank as the second-most important contributor to climate change after carbon dioxide. Yet while methane concentrations in the atmosphere can be easily measured, it is difficult to determine the contribution of different sources, whether human or natural. This is necessary information for reducing emissions.

“In an oil reservoir, there is a layer of gas above the oil which has a methane content of 50 to 85 percent. When you pump the oil to the surface this associated gas will also escape,” explains IIASA researcher Lena Höglund-Isaksson, who led the study.  In oil production facilities in North America, almost all of this gas is recovered and what is not recovered will for the most part be flared to prevent leakage (and potential explosions), while a very small fraction is simply vented. In other parts of the world, where recovery rates are lower, much larger quantities of this gas are released into the atmosphere.

“Existing global bottom-up emission inventories of methane used rather simplistic approaches for estimating methane from oil production, merely taking the few direct measurements that exist from North American oil fields and scaling them with oil production worldwide,” says Höglund-Isaksson. This approach left a large room for error, so Höglund Isaksson decided to develop a new method that could better account for the many variations in oil production around the world.

In the new paper, published in the journal Environmental Research Letters, Höglund-Isaksson estimated global methane emissions from oil and gas systems in over 100 countries over a 32-year period, using a variety of country-specific data ranging from reported volumes of associated gas to satellite imagery that can show flaring, as well as atmospheric measurements of ethane, a gas which is released along with methane and easier to link more directly to oil and gas activities. 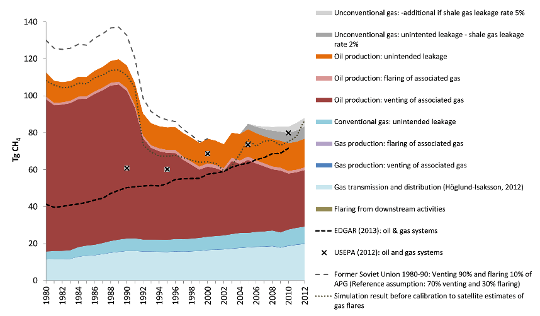 Graph showing the sources of methane from oil production since 1980. Click to enlarge. ©Höglund-Isaksson 2017

She found that in particular in the 1980s, global methane emissions were as much as double previous estimates. The study also found that the Russian oil industry contributes a large amount to global methane emissions. A decline in the Russian oil industry in the 1990s contributed to a global decline in methane emissions which continued until the early 2000’s. At the same time, Höglund-Isaksson found, methane recovery systems were becoming more common and helping to reduce emissions. Yet since 2005, emissions from oil and gas systems have remained fairly constant, which Höglund-Isaksson says is likely linked to increasing shale gas production which largely offsets emission reductions from increased gas recovery.

Höglund-Isaksson points out that her estimates are only as good as the data allow and that there is still uncertainty in the numbers. She says, “To improve the data, a close collaboration between the scientific measurement community and the oil and gas industry would be needed to make more direct measurements available from different parts of the world.”