Tackling air pollution in Delhi requires a smart mix of measures not only within the city, but also in the surrounding states. 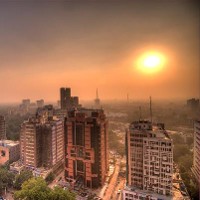 Poor air quality is a major concern worldwide, with fine particular matter (PM2.5) especially associated with serious health impacts. India suffers considerably from air pollution, having four of the top ten cities with the highest concentrations of PM2.5 in the world according to the World Health Organization. And despite Indian authorities adopting ambitious pollution control measures, the anticipated economic growth in India might further deteriorate Delhi’s air quality.

New research announced today shows that cleaning up the air in Delhi requires a smart mix of measures that take into account the multiple sources of PM2.5 in Delhi and the surrounding states.

The research, which was conducted by researchers from IIASA and the National Environmental Engineering Research Institute (NEERI) in Nagpur, India, found that only about 40% of PM2.5 that the average inhabitant of Delhi is exposed to originates from within the city. Instead, the majority (60%) comes from outside Delhi with half from the surrounding states of Haryana and Uttar Pradesh, a quarter from sources even further away including neighboring regions, and a quarter from natural sources.

The study, which was funded by the Technology Information Forecasting and Assessment Council (TIFAC) in India and IIASA, showed that the transport sector contributes nearly 20% of the PM2.5 in the ambient air in Delhi. Other equally important sources include the burning of biomass in cooking stoves (mainly from the surrounding rural areas); and secondary inorganic aerosols which are formed from reactions of sulfur dioxide and nitrogen oxide emissions emitted by power plants, industry and traffic with ammonia from agricultural activities.

“In order to solve Delhi’s pressing air quality problem, the authorities need to address sources of air pollution that are not typically addressed in other countries’ air quality management portfolios,” says Anil Bhanarkar a scientist at NEERI and one of the coauthors of the study. His colleague and co-author Padma Rao adds, “The research identifies a range of measures with major emission reduction potentials including road paving to reduce road dust emission, a rapid transition to clean cooking fuels in Delhi and its neighboring states, and the comprehensive management of agricultural and municipal waste incorporating a ban on the open burning of waste.” 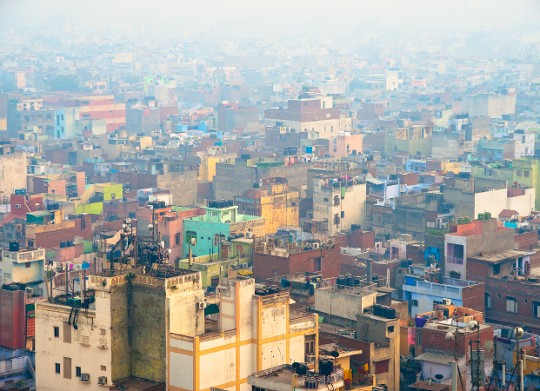 Air pollution within Delhi comes from a variety of sources both inside and outside city limits. © ninadan | Adobe Stock Photo

“Tackling the multiple sources of air pollution in Delhi and its surroundings will also deliver a range of other benefits,” says IIASA Air Pollution and Greenhouse Gases Program Director Markus Amann, who led the study. “We would not only reduce the estimated 8,900 premature deaths a year from air pollution in Delhi, but also cut the city’s greenhouse gas emissions and accelerate infrastructure development such as through power grid expansion and new waste management practices.”

The research is based on the development and application of the IIASA Greenhouse Gas-Air Pollution Interactions and Synergies (GAINS) model to Delhi.  In the study IIASA carried out the detailed modeling and NEERI built the detailed emission inventory. The GAINS model is a scientific tool that has helped policymakers and researchers across the globe identify a smart mix of measures to simultaneously cut air pollution and greenhouse gas emissions. It has been implemented for numerous regions and countries around the world, most notably for Europe where it has provided key input to the Convention on Long-range Transboundary Air Pollution of the United Nations Economic Commission for Europe and the European Union’s Clean Air Strategy among other areas.

This study was funded by the Technology Information Forecasting and Assessment Council (TIFAC) of the Department of Science and Technology of the Government of India and IIASA.