As incomes rise, people buy more big appliances like washing machines, refrigerators, and televisions. But the link between income and appliance ownership is more complicated than is assumed. 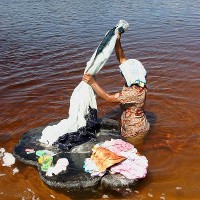 In order to understand how eliminating poverty will affect energy usage and greenhouse gas emissions, researchers examine how household consumption and energy use increases with rising income. In particular, they want to understand the drivers of owning large household technologies like washing machines, refrigerators (also known as white goods), and televisions, which use a lot of electricity. A new study from researchers at the International Institute for Applied Systems Analysis (IIASA) shows that it’s not a simple relationship: which appliances people buy depends not only on their income, but also factors such as wealth, race, and culture.

What makes a person decide to buy a washing machine or a television, and which do they buy first?

“People with similar incomes in different countries have very different sets of large electric appliances. The affordability of appliances, wealth indicators, and even culture and ethnicity in some cases, better explain ownership than does just income,” says IIASA researcher Narasimha Rao.

The researchers were surprised at the extent to which non-income factors explain differences in appliance ownership in countries. In India, they found that people have a strong preference for televisions over refrigerators, while in South Africa and Brazil, this is not the case.  They also found that particular communities have a propensity for or against ownership of particular appliances. For example, Sikhs in India have a greater chance of owning refrigerators than others, and blacks in South Africa and Brazil are less likely to own washing machines than others.

The reasons for these differences were not fully discernable in the data. The researchers suspect that differences in appliance prices between countries play a role, as do particular cultural preferences, for example that Sikhs consume a large amount of dairy products.

“Our study suggests that to make appliances widely accessible to the poor, we need to consider affordability and price trends more carefully. Researchers should also evaluate other market dynamics that may influence differences in ownership, such as market access,” says Rao.

The study was conducted as part of the ERC-funded Decent Living  Energy Project. (ERC-2014-STG)

How much energy would it take to provide decent living standards to all?