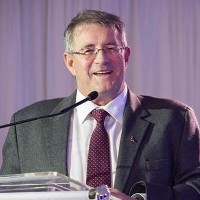 Dr van Jaarsveld will bring extensive leadership experience to IIASA, both in academic and research management positions. Since 2015, he has been Vice Chancellor and Principal of the University of KwaZulu-Natal - one of the foremost research intensive universities in South Africa. And from 2009 to 2015, he was Chief Executive Officer of South Africa’s National Research Foundation, where he doubled the budget from ZAR2bn to ZAR4bn (EUR 253m) and led the research funder’s drive for excellence and transformation across the South African national research landscape.

“We are delighted that Albert van Jaarsveld will become IIASA’s eleventh Director General,” said Professor Mike Clegg, Chair of the IIASA Council which made the appointment today. “He brings to IIASA wide-ranging experience in research management, administration, and scientific leadership. On behalf of the IIASA Council, which represents the interests of science academies and national research funders in 23 nations around the world, I warmly welcome Dr van Jaarsveld to IIASA.”

IIASA is an international scientific institute that conducts research into the critical issues of global environmental, economic, technological, and social change that we face in the twenty-first century. It is funded by National Member Organizations—typically national academies or national research funders—in 23 member countries. The institute’s research findings provide valuable options to policymakers to shape the future of our changing world.

During his career, Dr van Jaarsveld has held full professorships at both the Universities of Pretoria and Stellenbosch. His research expertise in biodiversity and conservation planning, biodiversity and climate change, as well as ecosystem services explores the interactions between humans, natural resources, and the environment which is at the heart of many of the major global challenges facing humankind and central to IIASA’s research agenda. He also has significant international science management experience including as co-chair of the Millennium Ecosystem Assessment follow-up: Sub-global assessments; member of the ICSU nominations committee; acting as IPBES science focal point; chair of the G8 science ministers Group of Senior Officials on Global Research Infrastructure; chair of the International Group of Funding Agencies (IGFA); co-chair of the Belmont Forum; and as a member of the ICSU review panel (2013-2014).

“Leading IIASA into the next decade greatly motivates me,” explained Dr van Jaarsveld. “I am passionate both about protecting the environment and about using science as a force for positive change at the global level—both of which are central to IIASA’s work and mission. I look forward to working with IIASA staff, its National Member Organizations, and IIASA’s large network of collaborators across the world for a better future.”

“Professor Kabat has made a significant contribution to IIASA over the last six and half years, growing the organization substantially in terms of its global membership and its role in international science to policy discourse, staff and research output, and income. On behalf of the IIASA Council I thank him for his excellent work and dedication to IIASA, and wish him all the best in his new position at WMO,” concluded Professor Clegg.

About the University of KwaZulu-Natal

The University of KwaZulu-Natal (UKZN) was formed on in January 2004 after the merger between the University of Durban-Westville and the University of Natal. The pursuit of cutting-edge research in the natural, biomedical, humanities and social sciences, innovative curricula,  dynamic teaching and learning, state-of-the-art laboratories as well as accredited professional degrees have earned it a reputation as a leading higher education institution on the African continent. In 2018 UKZN is home to 45 000 students and 4500 staff, is rapidly emerging as an institution of choice for students  and staff, and provides a innovative platform for the pursuit of excellence in African Scholarship together with key industry and public sector partners

This latest accolade received by UKZN was to be ranked in the top 100 Times Higher Education (THE) Young University Rankings. This outcome was the result of strategic thinking, hard work and dedication by the University community to strive for excellence in everything done. Ranked number 83 in the THE Young University rankings in 2018, UKZN is the only South African University to feature in the top 100 list.