The World Meteorological Organization has appointed Pavel Kabat as its first chief scientist and research director. He will lead the overall strategic direction of the WMO science, and its underlying research activities, including the World Climate Research Programme, the World Weather Research Programme and WMO’s Global Atmosphere Watch, which monitors greenhouse gas concentrations, air quality and the ozone layer. 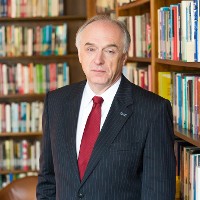 Professor Kabat is director general and chief executive officer of the International Institute for Applied Systems Analysis (IIASA), an independent, international, science, and science-to-policy institute. IIASA has seen substantial growth in its activities under Kabat’s leadership, and now has 23 member countries, nearly 400 international staff, and a global research network of around 3,000 scholars and over 800 partner institutions. He is also a professor of Earth System Science at Wageningen University in the Netherlands.

"WMO is in the process of strengthening its interaction with weather, climate, water and related environmental science communities. The appointment of first chief scientist is emphasizing that,” said WMO Secretary-General Petteri Taalas.

“Pavel Kabat will be a great asset for WMO and its Members. His high calibre scientific and leadership skills as well as his global networks will contribute to the future success of WMO in serving its Members and advancing the global agenda on sustainable development, climate change mitigation and adaption, and disaster risk reduction”.

Kabat added, “I am delighted to join the WMO after nearly 7 years leading IIASA. I hope to bring my experiences from IIASA on systems thinking to this new position. I also look forward to work on further building bridges between water and climate issues by actively bringing science and policy partners together. I also hope that this will trigger more collaboration between IIASA and the WMO.”

Professor Michael Clegg, Chair of the IIASA Council commented “We congratulate Pavel on his appointment. We are very grateful for his leadership of IIASA over the last 6 years when he guided IIASA through a period of exceptional growth.”

The World Meteorological Organization (WMO) is an intergovernmental organization with a membership of 191 Member States and Territories. It originated from the International Meteorological Organization (IMO), which was founded in 1873. Established by the ratification of the WMO Convention on 23 March 1950, WMO became the specialised agency of the United Nations for meteorology (weather and climate), operational hydrology and related geophysical sciences a year later. The Secretariat, headquartered in Geneva, is headed by the Secretary-General. Its supreme body is the World Meteorological Congress. WMO provides world leadership and expertise in international cooperation in the delivery and use of high-quality, authoritative weather, climate, hydrological and related environmental services by its Members, for the improvement of the well-being of societies of all nations.