Differences within India’s population influence population projections for years to come, according to research conducted by IIASA and the Asian Demographic Research Institute. This information could help India and its workforce to catch up to more developed Asian countries with higher GDP per capita. 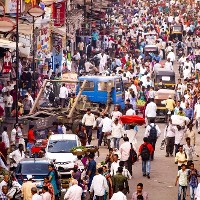 By 2025, India is expected to surpass China as the world’s most populous country, due to higher fertility rates and a younger population. However, a new study suggests that India’s population outlook depends heavily on the degree to which differences between regions within India’s population, or heterogeneity, are incorporated into population projection models.

“India is an extremely heterogeneous sub-continent. Simply because it is one nation, unlike composite Europe, it should not be treated as a uniform entity,” says Wolfgang Lutz, one of the authors and the World Population program director at IIASA, “The forecasts for India over the coming decades strongly depend on which sources of heterogeneity are explicitly included in the model.”

Samir KC, lead author of the paper, says he and his team of scientists noticed that users of population data in many sectors look at data without considering any differences in behaviors, as if all people would behave like an average person.

To account for the diversity between different areas of India, they designed a study that pioneered a five-dimensional model of India’s population differences that include rural or urban place of residence, state, age, sex, and level of education. The model was then used to show the population projection changes within scenarios that combine different levels of these factors.

If the projection is carried out while only explicitly accounting for age and sex, influential factors like higher education, associated with decreased fertility, are left out. Thus, a projection based on today’s much higher fertility rate of uneducated and rural women predicts a drastically larger population in the future.

Because education level across all of India has increased over time, and is associated with a lower fertility rate, the same projection may predict a drastically smaller population when accounting for education and increasing urbanization. Combining both effects, the influence of education appears to dominate, resulting in a lower population projection.

This inspired the researchers to investigate further into future education trends. If education were to stay at its current level, they found, the population would increase slightly more than if education improved over time.

Depending on the dimensions considered, when fertility, mortality, education and migration rates are frozen at the 2011 levels, stratification by education, states, or residence can result in population projections that span a huge range from 1.6 to 3.1 billion. Where these rates change according to plausible model predictions, the population peaks between 1.65 to around 1.8 billion. The difference between projections shows the critical importance of deciding which demographic measures to include in a projection model, and at what rates of change.

“At the most general level, the research reveals the importance of considering differences within sub-national populations, and recognizing that they are at different stages of a general development,” says Lutz, “Differences in development are to a large extent driven by improvements in the skills, education, and capacity of labor within different countries.”

That’s why the researchers conclude in their paper that in addition to age and sex, education should also be routinely included in population forecasts because of its well-established implications for improving the economy and quality of life, while reducing population growth and mortality rates.

For its part, China has invested heavily in universal education since the 1950s and is decades ahead of India in terms of human capital. But it isn’t too late for India to catch up.

“Our population projection for India in 2050 looks similar to what China already has today. This implies that India is some three decades behind,” says Lutz, “But since it has recently expanded education efforts for the youth, there is good hope for the future.”

In fact, the percentage of women that had never attended any school has dropped from 70% to 46% since 1990.

As India’s young population is set to surpass China in size, continued investment in education could translate growth into economic and human resources that are competitive with the wealthiest and most powerful nations in Asia.

“Continuously improving population projections can help support increased investment in education and human resources as India continues to develop,” says KC adding: “We hope that people approach us for collaboration to run more future narratives, do more in-depth analysis, or use this research as input for policy work. We made all our calculations open so people can make their own 'what-if' scenario, which will help us improve our projection and make a stronger case for the importance of education in India.”

Disability among India’s elderly much higher than census estimates