IIASA researchers contributed to a new joint report from the World Bank and the International Cryosphere Climate Initiative, which lays out measures for reducing pollution that could help slow warming in the Arctic, while also improving health worldwide. 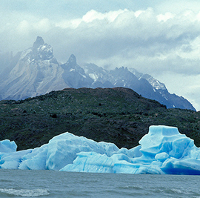 The report, On Thin Ice: How Cutting Pollution Can Slow Warming and Save Lives, brings together the latest findings on air pollution, climate change, human health, and the cost and potential impact of mitigation measures. It finds that targeting specific pollutants including black carbon (soot) and methane could have an immediate and substantial effect. These pollutants are short-lived in the atmosphere but have a significant effect on both climate change as well as human health.

Recently, IIASA researchers have supported work on sources and transport of pollution to the Arctic, for example in a recent study published in Atmospheric Chemistry and Physics. When ice and snow get coated with dust or soot, they become less reflective and melt more quickly. And since Earth’s snow and ice-covered areas also help keep the planet cool, the loss of ice is a potential feedback cycle that could contribute to even more warming as well as other climate change impacts.

The new report, by a global consortium of researchers, finds that measures to cut methane and black carbon could substantially slow warming, while saving many lives. For example, it shows that reductions in methane and black carbon emissions could lead to up to 40% reduced loss of sea ice and 25% reduced loss of snow cover by mid-century. The study also shows that a 50% drop in open field and forest burning could result in 190,000 fewer deaths globally every year, and use of improved wood and coal stoves for heating could save 230,000 lives annually, many of these in OECD nations as well as East Asia.

In their work on the project, IIASA researchers used the GAINS model to estimate emission trajectories, define key methane and black carbon measures for anthropogenic sources and estimate their mitigation potential.  This work follows the approach applied already in the UNEP Integrated Asssessment of Black Carbon and Troposperic Ozone.