Age is not just the number of years one has lived, argue IIASA population researchers. A new study from the group provides a set of tools for measuring age in all its dimensions. 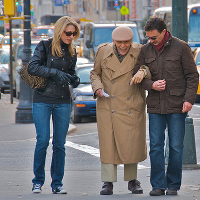 A groundbreaking study published in the journal Population and Development Review  by IIASA population researchers Warren Sanderson and Sergei Scherbov reorients the way demographers study population aging, providing a new toolbox of methodologies for demographers to better understand the impacts of an aging population on society.

Previously, studies of aging used only one characteristic of people, their chronological age. The new study provides a framework for measuring aging based instead on characteristics of people that change with age, including life expectancy, health, cognitive function, and other measures. These measures can be used by demographers to better understanding aging societies.

“Your true age is not just the number of years you have lived,” says IIASA researcher Sergei Scherbov. “It also includes characteristics such as health, cognitive function, and disability rates.”

Demographers have not traditionally used such measures in studies of population and society, instead using age as a proxy for those characteristics. But as lifespans get longer, the same age no longer correlates with the same level of health and other such characteristics.

“We use to consider people old at age 65,” says Scherbov. “Today, someone who is 65 may be more like someone who was 55 forty-fifty years ago in terms of many important aspects of their lives.”

The authors show that policy recommendations with respect to aging differ depending on exactly which characteristics of people are measured. “For different purposes we need different measures. Aging is multidimensional,” says Scherbov. By reconceptualizing population aging to incorporate how people actually function, the study provides the foundation of a much richer and more realistic view of population aging.

Scherbov recently won an advanced grant from the European Research Council to study this topic together with his colleagues. More>>

The ERC Grant to Sergei Scherbov supports his work to explore population aging and its impacts on Europe and beyond.